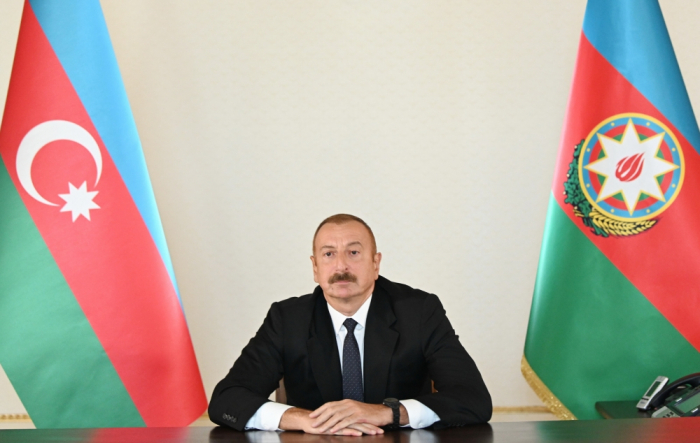 "Armenian armed forced fired on our settlements, as well as our military positions, from several directions this morning, using various types of weaponry, including heavy artillery.

As a result of the enemy fire, there are casualties among the civilian population and our servicemen. Some people have been wounded. May God rest our martyrs in peace! Their blood will not remain unavenged. The Azerbaijani Army is currently firing on the enemy's military positions, and as a result of these strikes, many units of the enemy's military equipment have been destroyed. This is another manifestation of Armenian fascism.

Armenia's military provocations against Azerbaijan have become regular of late. In July, our servicemen and a civilian were killed as a result of artillery fire in the direction of Tovuz on the Armenian-Azerbaijani border. It is no secret that the first fire, including artillery fire, was opened by Armenia, and the first victims were Azerbaijani servicemen. Azerbaijan gave a fitting rebuff to the enemy and they could not move an inch forward. The enemy was stopped and the territorial integrity of our country was protected. As a result of the crushing blows, the Armenian side was forced to accept a bitter defeat. I have said this and I want to say again that if we had wanted, we could have conducted military battles on the territory of Armenia. However, we do not have military targets in Armenia, and this being the case, a ceasefire was introduced a few days later.

What objectives did Armenia pursue by committing this provocation? First of all, Armenia plans to occupy Azerbaijani lands and does not conceal that. Their military-political leadership tried to threaten Azerbaijan with a new occupation, a new policy of occupation for new territories – this is the policy of Armenia’s military-political leadership today. Another reason is to distract the population from the very serious social and economic problems in Armenia and portray Azerbaijan as an enemy. Yet another reason is that Armenia is doing everything possible to disrupt the negotiations, and I can say that it has succeeded in doing that. It is as a result of Armenia's hypocritical, unconstructive and false policy that the negotiations have actually stopped and this provocation is aimed at these goals. These are the main goals for them.

In July, Azerbaijan gave a fitting response to the enemy, preserved its territorial integrity and once again showed that anyone speaking to Azerbaijan in the language of threats will regret doing that. Unfortunately, this was not a lesson for them. However, after the July provocation, I said that this bitter defeat by Armenia should be a lesson for them.

Armenia's provocations are also reflected in the statements made by the Armenian leadership. A year ago, the Armenian prime minister said in the occupied territories, in Khankandi, that “Karabakh is Armenia, full stop.” First of all, it is a lie, Karabakh is Azerbaijan, and I have repeatedly expressed my views on this issue. Karabakh is Azerbaijan, an exclamation mark! Secondly, this provocative statement was in fact a major blow to the negotiations. If the prime minister of Armenia says that “Karabakh is Armenia”, then what kind of talks can there be?! At the same time, the Armenian leadership has been repeatedly stating for two years that Azerbaijan should negotiate not with Armenia, but with the so-called “Nagorno-Karabakh republic”. This is a big blow to the negotiation process. First of all, Azerbaijan will never negotiate with the puppet junta regime. Secondly, attempts to change the format of talks show once again that Armenia's main goal is to disrupt the talks and maintain the status quo. However, the heads of state of the OSCE Minsk Group co-chairs have repeatedly stated that the status quo is unacceptable, which means that the occupation must end.

Armenia's provocations against us do not end at that. Recently, the “swearing-in” ceremony of the head of the so-called criminal junta was held in Shusha, an ancient city of our ancient Azerbaijan. Isn't this a provocation? This is an insult to us. They thought that we would put up with this insult. They are deliberately provoking us and they will see the bitter consequences.

Recently, a decision was made by the so-called parliament of the “Nagorno-Karabakh republic” to settle people in the ancient Azerbaijani city of Shusha. This is another provocation. Recently, the prime minister of Armenia announced that “voluntary” military units would be established, bringing together tens of thousands of people. Why is this necessary? Who will they fight against? This was part of the preparations for today's provocation against Azerbaijan. I have said several times, including from the UN platform recently, that Armenia is preparing for a new war, and Armenia must and will be stopped.

Armenia is pursuing a policy of illegal settlement in the occupied territories. Several Lebanese Armenian families have recently been resettled to Nagorno-Karabakh, including Shusha, an ancient city in Azerbaijan. This is a war crime. This is completely contrary to the Geneva Convention. Armenia will be held accountable for this crime. This is another provocation against us. Settlement in the occupied territories is a crime, and this policy has been pursued by Armenia for many years. The fact is that the country's population is declining due to the difficult economic, political and social situation in Armenia. Armenia is experiencing a demographic crisis and does not have the human resources to deploy its people in the occupied territories. That is why they hope for Armenians living abroad. This policy is currently underway. At the same time, according to the accurate information we have, Armenia has carried out illegal settlement in some of our occupied territories. The names of our districts and villages are being changed. The historical heritage of Azerbaijanis is being erased. Our historical monuments are being destroyed. Azerbaijani mosques are being destroyed and desecrated. Armenia keeps cows and pigs in our mosques. This is the greatest insult to the entire Muslim world. The graves of our ancestors are being destroyed by tractors. It is fascists, vandals and savages who have done this.

At the same time, the recent military exercises in the occupied territories should be considered another provocation by Armenia. Because these exercises have one purpose: to attack Azerbaijan, to fire on the civilian population and to occupy new lands! All the facts I have mentioned show again that Armenia and its ugly policies are the source of danger in the region.

Azerbaijan has not resorted to any provocation. Azerbaijan simply defends its interests, supports its position and pursues its policy openly. We have repeatedly stated that Nagorno-Karabakh is historical and ancient land of Azerbaijan, and this is true. When the prime minister of Armenia says that “Karabakh is Armenia”, it is a lie. When I say that “Karabakh is Azerbaijan”, it is true. The whole world recognizes Nagorno-Karabakh as an integral part of Azerbaijan. Historical justice is on our side. Because it is our native land, our ancestral land. International law is on our side. All international organizations recognize the territorial integrity of Azerbaijan. All countries recognize the territorial integrity of Azerbaijan. Decisions and resolutions adopted within international organizations explicitly state that Nagorno-Karabakh belongs to Azerbaijan. Four UN Security Council resolutions call for an immediate, full and unconditional withdrawal of Armenian forces from the occupied territories. These resolutions have been on paper for almost 30 years. Negotiations within the Minsk Group have been going on for almost 30 years and, as a result, Armenia has paralyzed the negotiations by regularly committing military provocations. Besides the United Nations, all other leading international organizations support our rightful position. The Non-Aligned Movement is the second largest international institution after the United Nations, and it is currently chaired by Azerbaijan. It has adopted a fair resolution on the conflict. The Organization of Islamic Cooperation has adopted fair resolutions. The decisions of the OSCE and the resolutions of the European Parliament support our position. Our position is based on international law and justice. We are fighting on our own land. Today, the Azerbaijani Army is dealing crushing blows to the enemy on Azerbaijani soil. Today, the Azerbaijani Army protects the territorial integrity of Azerbaijan on its territory. What are Armenian soldiers doing in our lands?! What is the Armenian army doing in our lands?! It is no secret that 90 percent of the personnel in the “Nagorno-Karabakh army” are Armenian citizens. Armenia is an occupying state, this occupation must and will end.

We are on the right path! Ours is the cause of justice! We will win! Karabakh is ours! Karabakh is Azerbaijan!"