Schoolchildren killed as a result of Armenian violence 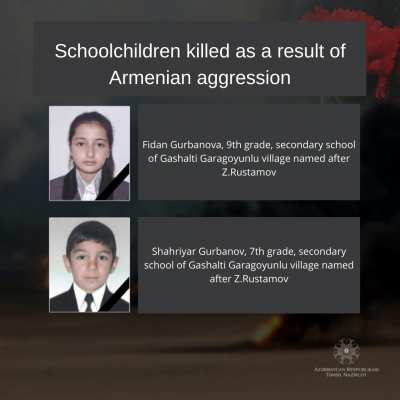 On September 27, Elbrus Gurbanov, a resident of the Gashalti village of Naftalan region, and his four family members were killed as a result of the intensive shelling by the Armenian Armed Forces. Regretfully, two of those killed are schoolchildren.

They are Shahriyar Gurbanov, born in 2007 and his cousin Fidan Gurbanova, born in 2006. They were both schoolchildren from secondary school of Gashalti Garagoyunlu village named after Z.Rustamov.

Starting from yesterday, Armenian side tartgets civilians,as well as infrastructure by violating the norms and principles of the international law and Geneva Convention, 1949.

Staff of the Ministry of Education extend condolences over the death of all our compatriots, including a whole family and students in Naftalan, who lost their lives as a result of the Armenian aggression.

We wish success to our soldiers for liberation of Azerbaijani lands, who have made history and are a source of pride!