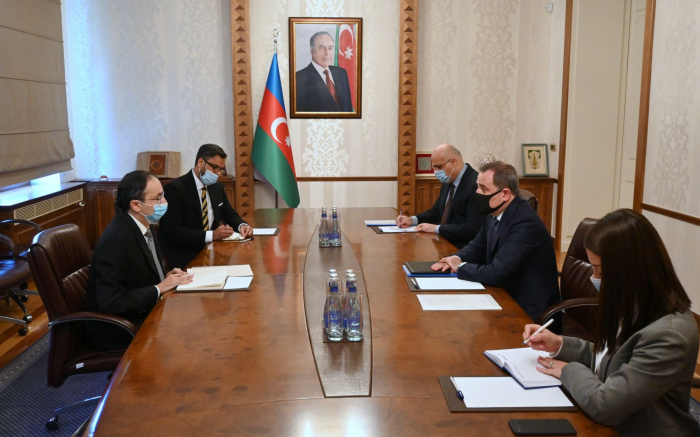 Azerbaijani Foreign Minister Jeyhun Bayramov on Monday received a copy of the credentials of the newly appointed Ambassador of the Islamic Republic of Pakistan to the Republic of Azerbaijan Bilal Hayee, the Foreign Ministry told AzVision.az.

Minister Jeyhun Bayramov congratulated Ambassador Bilal Hayee on his appointment and stressed the special importance of the relations between Azerbaijan and Pakistan. High level of cooperation between our countries in the political, economic, cultural and other fields, as well as cooperation and mutual support on multilateral platforms, were noted with satisfaction.

Afterward, speaking about the new act of aggression committed by Armenia against Azerbaijan on September 27, Minister Jeyhun Bayramov informed that the armed forces of Armenia shelled the Azerbaijani positions and villages along the line of contact which resulted in casualties among the civilian population. Noting that the attack was a continuation of the deliberate provocative actions carried out by Armenia in the latest months, the Minister said that Azerbaijan took appropriate countermeasures against the armed forces of Armenia within its legal right to self-defense and to ensure the security of civilians. In this regard, Minister Jeyhun Bayramov expressed his gratitude for always existing support of brotherly Pakistan.

In his turn, Ambassador Bilal Hayee stressed that he would spare no efforts for further development of bilateral cooperation agenda issues at a high level.

The Ambassador also stressed that Pakistan always stands by our country in the just struggle of Azerbaijan.