"Armenia places purposefully its fire points next to residential areas" 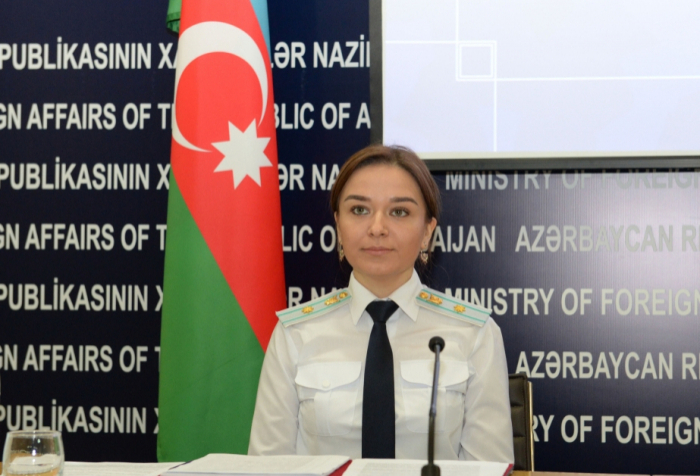 On 27 September 2020, the armed forces of Armenia have launched another act of aggression against Azerbaijan, by intensively attacking the positions of the armed forces of Azerbaijan as well as residential areas along the frontline, with the use of large-caliber weapons, mortar launchers and artillery of different calibers, the head of the press service of the Prosecutor General's Office of the Republic of Azerbaijan Gunay Salimzadeh told reporters.

Having openly and purposefully targeted the civilian population and civilian objects, in addition to military servicemen Armenia has killed so far nine civilians, among them elderly, women and children, and inflicted serious damage on numerous houses and civilian objects. This request of the Government of Armenia, which violates blatantly the international humanitarian law and human rights, represents another demonstration of its hypocritical policy.

On the other hand, if we take into account the fact that military operations are taken place on the occupied territories of Azerbaijan, this request by Armenia could be also understood as its public confession of the occupation of the Azerbaijani lands. What we can see is that remaining faithful to its customs, Armenia doesn’t give up on turning the European Court into a tool in its political games and using this exclusively legal ground for its dirty political purposes. We hope that the European Court will stay away from Armenia’s insidious political games.

We consider that one should prevent the attempt by Armenia to misuse the human rights protection system, which continues to violate the fundamental norms and principles of international law, the UN Security Council Resolutions 822, 853, 874 and 884 dated 1993, requesting full and unconditional withdrawal of the forces of Armenia from the occupied territories of Azerbaijan, the international humanitarian law, including the 1949 Geneva Conventions and their additional protocols, as well as doesn’t implement the judgment of the European Court of Human Rights in the pilot case Chiragov against Armenia.

As it was stated on multiple occasions by the Ministry of Defense of Azerbaijan, contrary to Armenia, the Armed Forces of Azerbaijan doesn’t target the civilian population, civilian objects and civilian infrastructure.

Taking into account that Armenia places purposefully its fire points next to residential areas, the Ministry of Defense made an official call on the population residing in the occupied territories to stay away from the military objects. It should be also noted that due to the occupation of the Nagorno-Karabakh region and other surrounding territories of Azerbaijan, attacks against the Republic of Azerbaijan and regular military provocations, martial law was declared in the Republic of Azerbaijan from 00:00 on 28 September 2020. In accordance with Article 15 of the European Convention, Azerbaijan has notified to the Secretary-General of the Council of Europe about the derogation on some obligations due to the declaration of martial law on 28 September 2020. We inform that the Armed Forces of the Republic of Azerbaijan fully and resolutely respect the international humanitarian law in the counter operations conducted within the right to self-defense to prevent another military aggression by Armenia and protect the civilian population densely residing along the frontline.