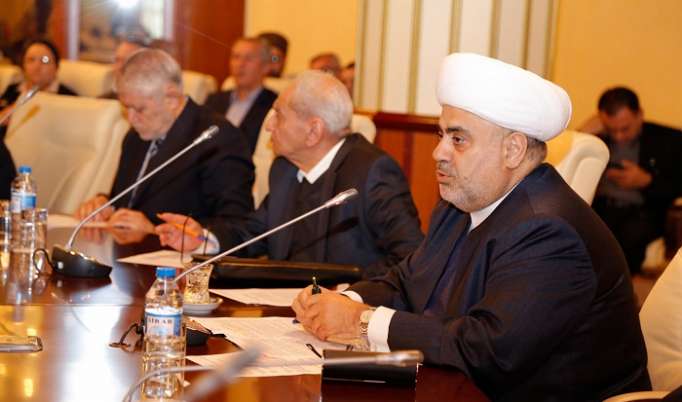 Leaders of religious confessions in Azerbaijan have sent letter to President Ilham Aliyev regarding the victories of the Azerbaijani Army in liberating the occupied territories.

To His Excellency Mr. Ilham Aliyev, President of the Republic of Azerbaijan

On behalf of the religious communities we represent, we, the leaders of religious confessions living in Azerbaijan, sincerely congratulate Your Excellency, President and Commander-in-Chief of the Republic of Azerbaijan, on the victories of the Azerbaijani Army in liberating the occupied territories.

Dear Mr. President, thanks to the political will of Your Excellency, who continues and further develops the ideology of Azerbaijanism founded by national leader Heydar Aliyev, we, the followers of various religious confessions, are fulfilling our religious needs in Azerbaijan at a high level and feeling the attention, care and protection of the state. Thanks to the global initiative and practical efforts of Your Excellency and First Vice-President Mehriban Aliyeva, Azerbaijan has gained a global reputation as a patron of multicultural values, along with national and spiritual values. Religious people of different confessions living in Azerbaijan as proud citizens of this country were extremely delighted with your congratulatory address to the nation, your historic speech at the 75th session of the UN General Assembly, as well as your valuable interview with Rossiya-1 TV channel. Along with the achievements of our country in the political, economic, social and humanitarian spheres, we appreciate and support the natural right of Azerbaijan to restore its territorial integrity and ensure the inviolability of its borders.

Dear Mr. President, we, the clergy, who always aspire for justice and truth in the name of our Almighty, have always said that we share and support your humane and humanitarian initiatives in the world as the head of our state. Your Excellency, you are a political figure who attaches great importance to cooperation between religions and civilizations, a leader of the state who supports human solidarity, peaceful coexistence and mutual understanding. We all witness your unparalleled efforts to protect the sovereign rights of independent Azerbaijan at the highest international level, to achieve a just and peaceful settlement of the Armenia-Azerbaijan Nagorno-Karabakh conflict, and to respect the rule of international law. However, as Your Excellency rightly pointed out, the patience of the peace-loving people of Azerbaijan has its limits and Azerbaijan has been forced to respond to the aggressor appropriately. Instead of eliminating the fact of occupation, the Armenian side, which has repeatedly committed provocations at the borders of Azerbaijan thus drawing a line through the peace talks, forced the Azerbaijani state to defend its rights on the battlefield.

Your Excellency, Azerbaijan is known as a state that safeguarding religious and spiritual heritage, protecting national and universal values, repairing, building and restoring religious temples at the state level. We, the leaders of religious denominations, are direct witnesses of this attention. As religious figures, we are extremely concerned about the acts of vandalism against religious and historical sites and holy places in the Armenian-occupied territories of our country in return for the actions of Azerbaijan, which has restored and is protecting the Armenian church in the center of the capital Baku. Islamic places of worship and cemeteries in the land of ancient Karabakh are deliberately destroyed and desecrated. Along with the sites of general Islamic significance, historical falsifications and changes of original place names are carried out against Christian and Jewish temples and holy places. Work is underway to Gregorianize ancient Albanian and Orthodox churches. Such an attitude to the universal heritage is unacceptable.

Your Excellency, we, the leaders of religious denominations who support all the necessary steps you have been taking to restore justice, declare that during the events of 20 January and the Karabakh war, Christians, Jews, people of other nationalities and religions stood shoulder to shoulder with the Azerbaijani people. Along with National Heroes such as Mubariz, who died for the territorial integrity of Azerbaijan, we are proud of the heroic sons of the Fatherland representing the Jewish, Russian, Ukrainian and other nationalities, such as Agarunov, Yakovlev, Polovinko, Senyushkin. Today, all citizens regardless of their ethnic or religious affiliation are with the Commander-in-Chief in the defense of the homeland. We pray to the Almighty to repose all our children who were martyred in the defense of the homeland and to grant healing to the wounded.

Mr. President, the majority of the world community is aware that Azerbaijan is on the right path and defends its right to liberate its lands. The Caucasian Muslims Office, which is the religious center, and the Supreme Religious Council of the Caucasus Peoples of which we are all members are currently receiving calls of support and letters of solidarity from all over the world. Calls and letters are coming in from dozens of cities and provinces of fraternal Turkey, including Ali Erbas, the head of Religious Affairs, from Abuzar Ibrahimi Turkman, the Chairman of Iran's Culture and Islamic Communications Organization, from influential clerics from Tehran, Tabriz and Ardabil, from Russia, especially the muftis of the North Caucasus, from Uzbekistan, Georgia, Pakistan, Afghanistan, Algeria, Hungary, Bosnia-Herzegovina, Senegal and other countries, from the KAICIID International Center for Interreligious Dialogue, from the IRSICA organization under the OIC, from the European-Turkish Muslim Union. The letters emphasize that Azerbaijan is on the right path, supporting the determination of the Azerbaijani President and strongly condemning Armenian aggressors.

Your Excellency, Azerbaijan is the right side and, therefore, the truth is with us. We, the leaders of religious denominations in our country, ask the Almighty to promote the victory of Azerbaijan's cause, and call on all our compatriots living in different countries regardless of their national, religious affiliation and political views, born and raised in Azerbaijan, to show solidarity and unite more closely around the President of Azerbaijan and Commander-in-Chief.

With deep respect and esteem,

Chairman of the Caucasian Muslims Office

Archbishop of Baku and Azerbaijan

Head of the Mountain Jews Community in Azerbaijan

Head of the Albanian-Udi Community"