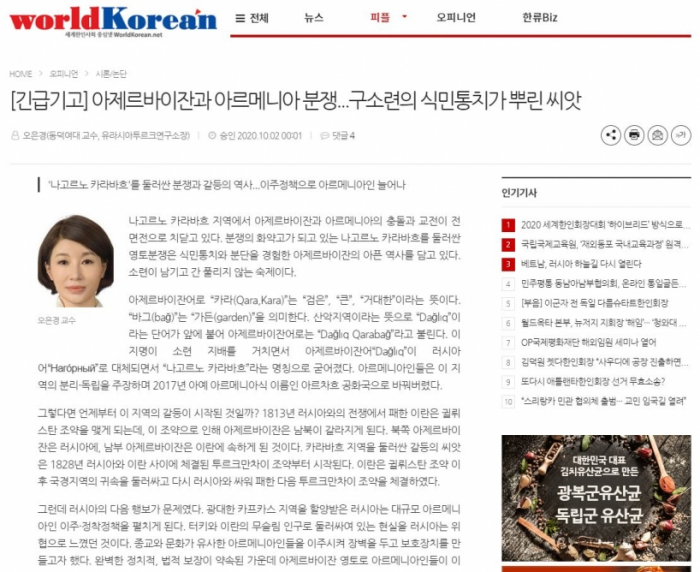 "WorldKorean" network, uniting Koreans around the world published an article on the Nagorno-Karabakh conflict titled "Armenian-Azerbaijani conflict, seeds sown by the colonial policy of former USSR".

The author of the article is a well-known Korean Turkolog Eunkyung Oh, professor at Dongduk Women's University and director of the Institute for Eurasian Turkic Studies. Stating that "Nagorno-Karabakh" belongs to the Azerbaijani language from the etymological point of view, the article highlights that the northern part of Azerbaijan was occupied by the Russian Empire following the 1813 Gulustan and 1828 Turkmenchay treaties.

After that, the demographic balance of the mountainous part of Karabakh was artificially changed by the purposeful resettlement of Armenians by Tsarist Russia to the Azerbaijani lands. In this process, 75 Azerbaijani settlements were destroyed and grounded in a short period of time.

The article also states that Nagorno-Karabakh is the territory of the Azerbaijan Democratic Republic declared in 1918, and after Azerbaijan joined the former USSR, this region received the status of an autonomous region within the Azerbaijani SSR. On the eve of the collapse of the USSR, resume of bloody activities by Armenia for the annexation of Nagorno-Karabakh from Azerbaijan, which resulted in the occupation of Azerbaijani lands by Armenia, the Khojaly genocide, and the loss of hundreds of thousands of Azerbaijanis' homes and the property was shown with obvious facts by the author.