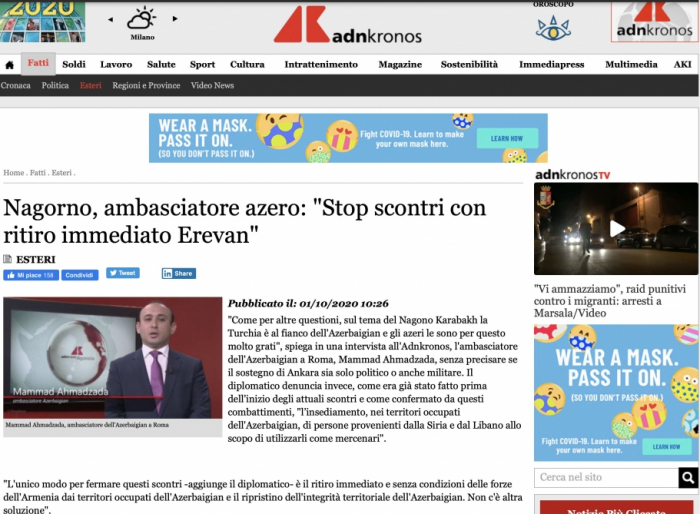 In an interview, the diplomat said that the only way to stop the current clashes is the immediate and unconditional withdrawal of Armenian troops from the occupied territories of Azerbaijan and to ensure the territorial integrity of Azerbaijan, and there is no other solution.

Ahmadzadeh reminded that Azerbaijan has been at war for 30 years, not 3 days, and the political and military leadership of Armenia is fully responsible for the current situation. Official Baku has only one goal: to ensure its territorial integrity and security in its sovereign territory within its internationally recognized borders, as the presence of Armenian troops in the territories of Azerbaijan is a threat to our sovereignty, as well as the stability of the entire region.

Ahmadzadeh noted that the reason for the current clashes is that, 20 percent of Azerbaijan's internationally recognized territories, including the Nagorno-Karabakh region and seven surrounding regions, have been occupied by Armenia for more than 30 years. Armenia has carried out ethnic cleansing against all Azerbaijanis in these areas, and more than a million of our citizens have been forcibly expelled from their native lands and become refugees and internally displaced persons. Their right to return to their homes and even to visit the graves of their family members has been violated. Armenia is also guilty of numerous war crimes against civilian Azerbaijanis, especially the 1992 Khojaly genocide.

The diplomat noted that what happened on Sunday was a continuation of the provocations carried out by Armenia in recent months.

Ahmadzadeh also said that people from Syria and Lebanon were stationed by Armenia in the occupied territories to be used as mercenaries.