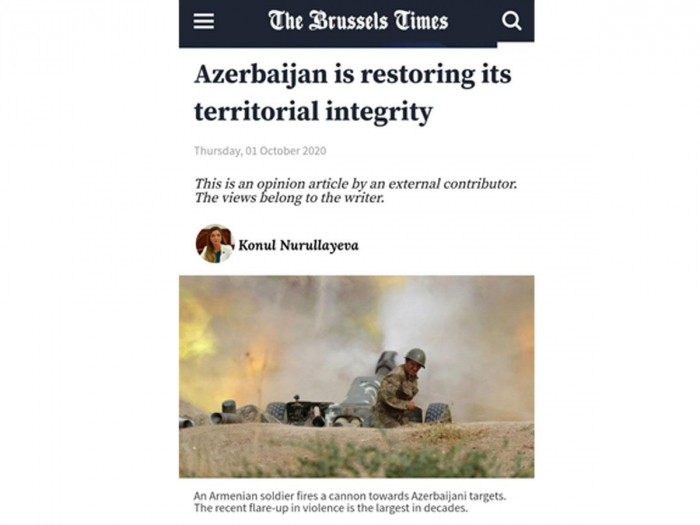 The Azerbaijani army is conducting these counter-offensive operations within the Azerbaijani borders recognized by the UN, Head of the Azerbaijan-Croatia Interparliamentary Relations Working Group, Azerbaijani MP Konul Nurullayeva wrote in her article published by The Brussels Times, AzVision.az reports citing the article.

In her article named “Azerbaijan is restoring its territorial integrity”, Nurullayeva said that at the recent meeting of the UN Security Council, the President of the Republic of Azerbaijan, Ilham Aliyev, repeatedly stated that “We have never had any intentions to occupy anyone else’s land. The armed forces of Azerbaijan have no intentions, or plans relating to the territory of Armenia, or anywhere else. However, we will most certainly defend ourselves within the borders of our own country”.

“Azerbaijan has always wanted a peaceful resolution of the conflict through diplomatic negotiations. By contrast, the Armenian leadership has disrupted the negotiation process by various means – making statements on the involvement of Nagorno Karabakh in the negotiation process as a third party, contrasting the positions of co-chairs of the OSCE Minsk Group and making new territorial claims against Azerbaijan,” Nurullayeva wrote.

“Additionally, recent provocations by Armenian armed forces have intensified along the borders and frontlines. As a logical result of this, the tensions in the conflict zone have risen to their highest level, making military operations inevitable. Unfortunately, losses are inevitable. However, this time Armenia is again violating fundamental humanitarian principles by targeting its military activity at our civilian population. In the past three days, 16 Azerbaijani civilians have been killed and 55 civilians have been injured. In July, this same shelling of civilians occurred along our border in the Tovuz region, resulting in the death of a 76-year-old resident of the village of Aghdam. In doing this, Armenia is brutally violating Article 49 of the Geneva Convention, as well as several articles in the Paragraph 3. Azerbaijan is keeping the international community regularly informed about these abuses of the Convention,” the MP said in the article.

“The battles are still ongoing. The harsh truth is that citizens of Azerbaijan have been living apart from their ancestral native homelands for nearly 30 years, as refugees and internally displaced people. Our citizens, who were expelled by force from their ancestral lands by the Armenian leadership, are now eager to return to their former homes. This is the absolute right of the citizens of Azerbaijan. In accordance with all requirements of international law, the use of any kind of opportunity may be considered to restore the territorial integrity of a state. Azerbaijan will therefore restore its territorial integrity and sovereignty based on the norms and principles of international law,” she said.