Azerbaijani President: They should make new statements that Karabakh is not Armenia 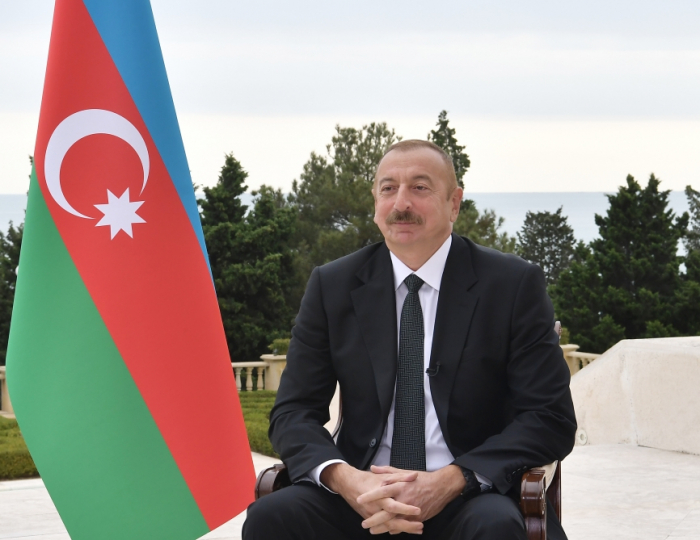 Actually negotiations on the resolution of the Armenia-Azerbaijan Nagorno-Karabakh conflict have stopped, Azerbaijani President Ilham Aliyev said during his interview with Al Jazeera TV channel.

“Actually negotiations stopped, because after his [Pashinyan] statement that Karabakh is Armenia, I said there is no rule for negotiations but our Minsk group co-chairs were making requests to me that Azerbaijan show maybe more how to say understanding, with respect to the fact that Armenian government is new, and maybe they do not completely control their emotions and their words,” the head of state said.

“And I said okay. Let’s try. We want to find a peaceful solution therefore, we waited for so many years and probably negotiations would have been continued if not for this distractive approach. And after that statement I had a meeting with Armenian Prime Minister but they were absolutely meaningless. They were formal. He was telling me that they are not going to give territories back. And then, what to talk about? If they don’t want to do that, if they go against elaborated principles by the Minsk-Group, which they elaborated for years, and means that he destroys negotiations. Negotiations cannot be held unilaterally. We need to have a partner but, in Armenia so far we don’t have a partner for negotiations,” President Aliyev added.

Responding to the question “So, can we say that Azerbaijan’s preconditioning for coming to a negotiating table is that Armenia withdraws from the occupied territories?”, President Aliyev said. “Actually, it was Armenian Prime Minister who put precondition to us. And that, by the way is another provocation. I think several months ago he put seven preconditions to Azerbaijan. Actually, he wanted to dictate his agenda, to us and to the Minsk-Group. And one of those preconditions was that Azerbaijan should negotiate with the so-called “Nagorno-Karabakh authorities”. And not only we but also Minsk-Group rejected it. Because it changes completely the format of negotiations, which was elaborated for more than twenty years. And negotiations are taking place between Armenia and Azerbaijan. So, he puts precondition on us and we rejected it. And the reason why he did it was again, he wanted negotiations to stop and keep the status quo unchanged. As far as we are concerned, we are always ready for negotiations. We never rejected it, we had difficult times in negotiation process in previous years. Not everything was going smoothly. But, with the previous Armenian leaders we had a process. And we were elaborating the so-called step by step approach. Otherwise, we wouldn’t have been in this process for so many years. It was not useless time. I think we have made a very big progress. I am in this process since 2003, and I worked with two previous Armenian presidents and we made progress. It was not easy, we had of course big variety of use but we were making step by step progress and we elaborated what we have now. And after Pashinyan came to power, he not only destroys everything before him, and he wants to pretend that Armenia before him did not exist and he is now the creator of new Armenia and he destroyed all the elaborated principles. Therefore, full responsibility is on him and his government. And by the way, reasonable people in Armenia understand it. They were already making statements alarming Armenian population that this person leads their country to catastrophe. It is not a way how to behave on negotiations, it is not a way how to provoke Azerbaijan. Another provocation was the so-called inauguration of the so-called leader of Nagorno-Karabakh in the ancient Azerbaijani city of Shusha. No other so-called “Nagorno-Karabakh leader” did that. Why he did it. In order to insult the feelings of Azerbaijanis. Then, they decided to move the so-called parliament of “Nagorno-Karabakh” from Khankandi to Shusha. Why? Another insult on Azerbaijanis. They openly resettle Armenians from Lebanon to the occupied territories, demonstrate it on TV which is a brutal violation of Geneva Convention, in order to demonstrate their hatred to us. Everything what he did was to destroy negotiation process. Therefore, now when they are pleading for negotiations, when Pashinyan calls world leaders many times and is complaining about Azerbaijan, I think those leaders should tell him it was you who destroyed negotiations. It was you who provoked Azerbaijan. It was you who insulted the feelings of Azerbaijanis. Therefore, you must be responsible for that. And Armenian people and I made an appeal a couple of days ago to Armenian people. They should make him responsible for that. We don’t have a problem with Armenian people, they are our citizens, we have thousands Armenians living in Azerbaijan, and those who live in Nagorno-Karabakh area we also consider them our citizens. And we invite them to live together with us as many other nationalities and ethnicities who live in Azerbaijan. Therefore, Armenia should refrain completely from these provocative statements. They should make new statements that Karabakh is not Armenia, and then, we will see.”