President Aliyev: I told French president that his statement is wrong 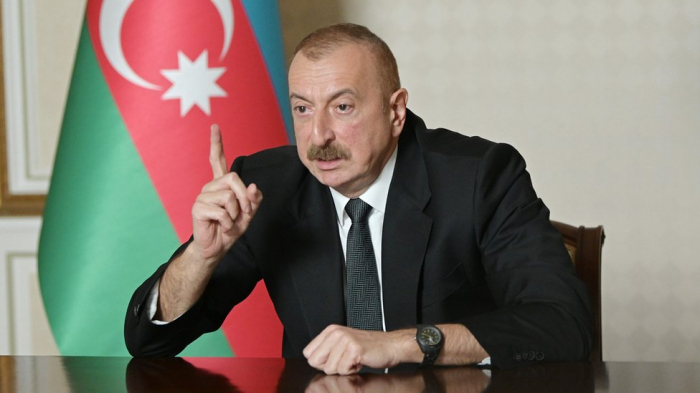 “This is fake news. Absolutely. The same fake news as they said that Turkish F-16 shot down the SU-25. The SU-25 had an accident I was informed, it hit the mountain because of unexperienced pilot,” the head of state said.

Asked about Armenians’ claims that they have evidence, President Aliyev said. “Let them show it. Where is evidence? Not only Armenia, unfortunately President of France I heard yesterday made a statement about that and he called me on the 27th in the evening and I said it is wrong, it is false. And he made the statements without any evidence. Let him give us evidence. Let him give us proofs. Only words? We can also say many words. But we don’t. We behave in a responsible way. There is not a single evidence of any foreign presence in Azerbaijan. What we do, we do ourselves.”

He stressed that Azerbaijan has capable army.

“We have enough people in our army, we have enough people in our reserves. I announced a partial mobilization, which will allow us to involve tens of thousands of reservists. If necessary, so we don’t need it. Armenia needs it, because Armenian population is declining. And it is only two million people. Therefore, they themselves now recruit people from Middle East and we have evidences and not only of Armenian origin. And by the way, it doesn’t make any difference whether it is of Armenian origin coming from Middle East or non-Armenian origin. If anybody comes from outside to fight as a mercenary that should be internationally addressed. So, it is this accusations that absolutely groundless, and we reject them, and we demand the evidences to be put on the table,” President Aliyev added.