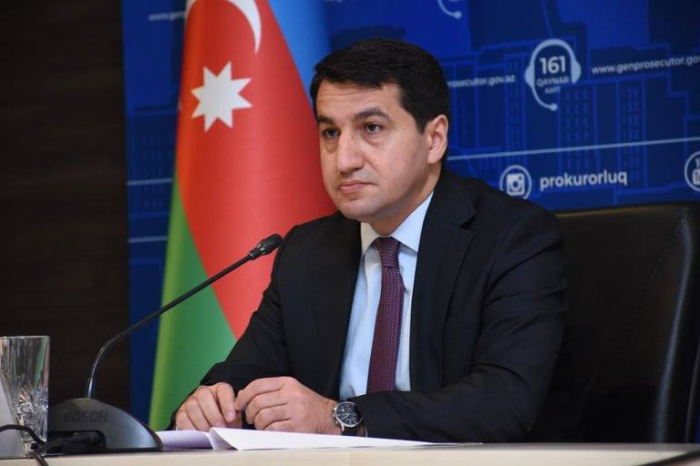 The Armenian Armed Forces launched missile attack on the living settlements in Azerbaijan’s Ganja city from Armenian territory, says  Assistant to the President of Azerbaijan and Head of the Department of Foreign Policy Affairs of the Presidential Administration of Azerbaijan Hikmet Hajiyev.

Hikmet Hajiyev also highlithed that the Armenian Armed Forces deliberately and purposefully opened fire at the Terter city and Horadiz city in the Fizuli region using heavy artillery and missiles.

"One more time, the Armenian side fired a rocket from its territory at the settlements in the direction of Fizuli and Jabrayil regions of Azerbaijan. As a result of these Armenian attacks, Azerbaijani civilians were killed and injured.

Armenia has recently fired more than 10,000 different types of shells and missiles at densely populated Azerbaijani settlements. More than 500 private homes were destroyed or severely damaged. In the course of military operations, combatants and civilians, military facilities and civilian facilities must be clearly distinguished.

These actions of Armenia are part of their policy of aggression and military occupation against Azerbaijan that Armenia has been pursuing for more than 30 years", Hajiyev noted.

"For this purpose, the Armenian armed forces use cluster bombs, which are forbidden by the international conventions.In accordance with the international humanitarial law and the Geneva convention, the Azerbaijani side has repeatedly warned the Armenian military leadership to refrain from artillery and rocket fire on settlements and civilians through relevant international organizations. They did not follow it, and they showed hypocrisy again. This clearly shows once again that Armenia's goal is to target civilians deliberately. Most artillery and rocket fires are carried out from artillery bases near the city of Khankendi," Hikmet Hajiyev stated.

"The Armed Forces of the Republic of Azerbaijan destroys these firing points in a targeted manner and with accurate fire to ensure the safety of civilians and takes adequate measures. The Republic of Azerbaijan has repeatedly stated that the presence of the Armenian armed forces in the occupied territories of Azerbaijan remains a major threat to the regional peace and security. Political and military leadership of Armenia is a threat to the entire region.To ensure lasting peace in the region, Armenia must withdraw its from the occupied territories of Azerbaijan in accordance with resolutions of the UN Security Council,"  Assistant to President noted.