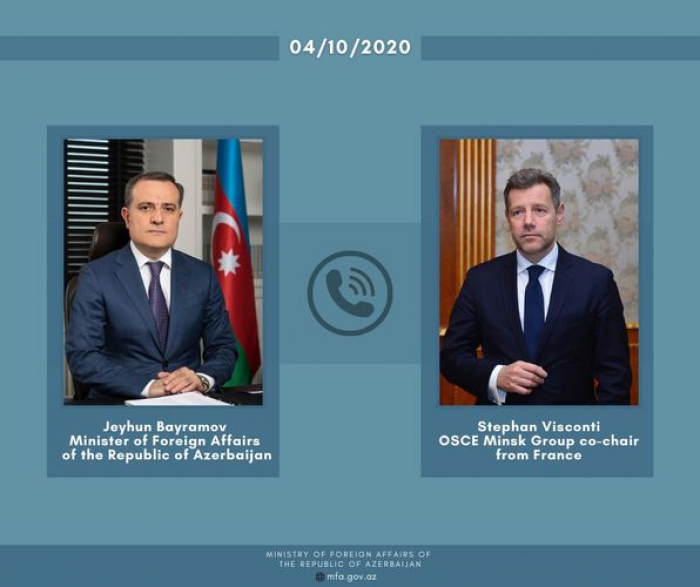 On October 4, 2020, upon the initiative of the Minister of Foreign Affairs of the Republic of Azerbaijan the telephone conversation took place between Foreign Minister Jeyhun Bayramov and OSCE Minsk Group co-chair of France Stephane Visconti, AzVision.az reports citing Azerbaijan Ministry of Foreign Affairs.

Minister Jeyhun Bayramov informed the French co-chair on the increased tensions in the region, especially Armenia’s deliberate shelling the Azerbaijani civilians and civilian objects. Minister underlined that targeting the Azerbaijani cities located far from the line of contact, including the second largest city of Azerbaijan Ganja from the territory of Armenia, resulted in casualties among the civilian population and destruction of infrastructure. French co-chair was informed that till now 24 Azerbaijani civilians were killed and 111 injured as a result of shelling by Armenia. It was brought to the attention of Stephane Visconti that by conducting these military provocations Armenia pursues the goal to terrorize and spread panic among the civilians. Minister stressed that it once again demonstrates the terror tactics of the political-military leadership of Armenia.

Stephane Visconti expressed serious concern over the increased tension in the region and emphasized the importance of respecting the ceasefire.

Minister Jeyhun Bayramov noted that the withdrawal of all Armenian armed forces from the occupied territories of Azerbaijan in accordance with the related resolution of the UN Security Council is necessary for ensuring peace in the region.