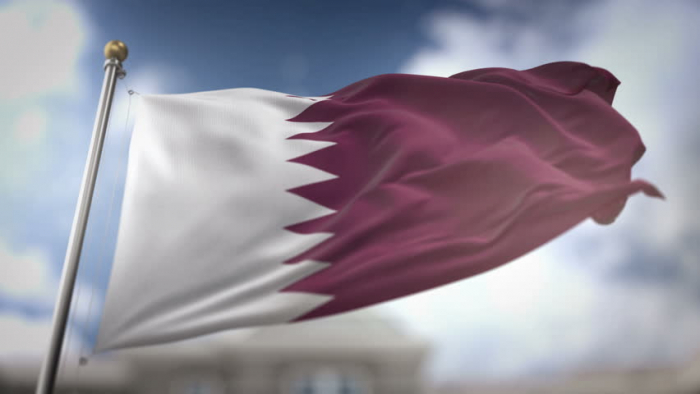 The Azerbaijani community in Qatar has issued a statement on Armenia's recent military provocations against Azerbaijan.

The statement reads: “We, Azerbaijanis living in Qatar regretfully state that at around 6 AM on September 27, the Armenian armed forces again violated ceasefire and intensively fired on the territory of Azerbaijan in the frontline using large caliber guns and sniper rifles. This appears to be another deliberate and targeted assault by the Armenian armed forces manifested in opening fire towards the civilians densely populated in the front-line areas and civil facilities. As a result of this yet another provocation of occupant Armenian forces, there are casualties among the civilian population and military personnel of Azerbaijan.

Deliberate targeting of civilians is a gross violation of international humanitarian law, including the Geneva Convention of 1949. In general, the Khojaly genocide committed in February 1992 and ethnic cleansing of Azerbaijani population in the occupied territories of Azerbaijan in the early 1990’s as well as the recent Tovuz provocation perpetrated in July 2020, when the world was fighting the COVID-19 pandemic, are vivid examples of targeting civilians by the Armenian armed forces.

Besides the fact that Armenia has been occupying close to 20% of the territory of Azerbaijan for almost 30 years, the numerous provocations of the Armenian armed forces on the state border with Azerbaijan once again demonstrated to the world that Armenians are aggressors.

As if this was not enough, Armenia is currently pursuing a policy of illegal settlement in the occupied territories of Azerbaijan violating the requirements of the Geneva Convention and the international law. Terrorists from various countries, such as Lebanon and Syria, are being deployed to and concentrated on the territories of Azerbaijan occupied by the state of Armenia.

Continuation of aggressive policy and divertive activities by Armenia which is not implementing UN Security Council Resolutions 822, 853, 874 and 884 that call for immediate withdrawal of the Armenian forces from the Azerbaijan territory, UN General Assembly resolutions on the “Situation in the Occupied Territories of Azerbaijan” adopted in 2006 and 2008, and ignoring the appeals of the UN and WHO and other influential international organizations regarding the current pandemic, as well as norms and principles of international law, should be resolutely condemned by the international organizations and the world’s leading powers. The US Congress also characterized Armenia as an aggressor country.

Appealing to world countries and international organizations, we call them to influence Armenia to immediately withdraw from the occupied Azerbaijani territories and take actual steps towards restoring peace in the region.” 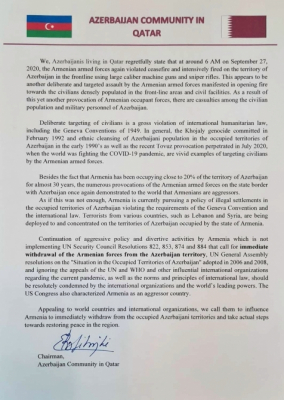