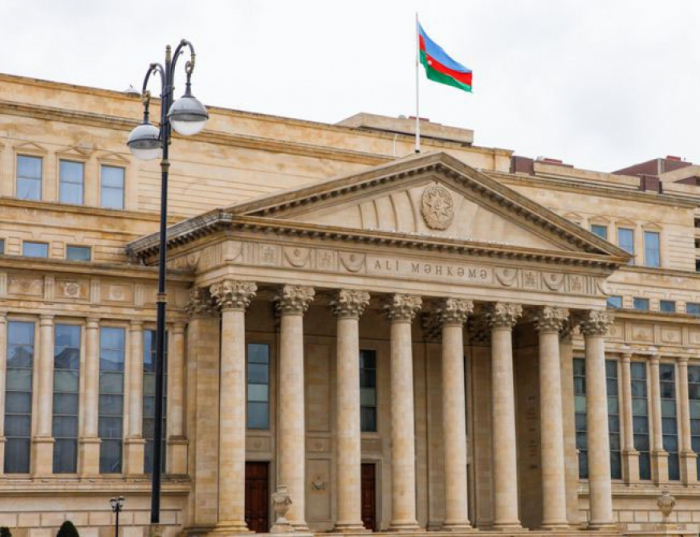 The Supreme Court of the Republic of Azerbaijan has issued a public statement concerning the measures taken in response to military aggression of Armenia against Azerbaijan and addressed to the supreme courts of countries, including the Member-States of the Council of Europe.

In response to this aggressive military advance, the armed forces of Azerbaijan have conducted counter-offensive operations against the Armenian occupying forces in full compliance with Article 51 of the United Nations Charter by invoking the inherent right of self-defense and the norms of international humanitarian law.

It is reported that since 27 September 2020, 29 civilians, including three children, have been killed and more than 144 have sustained injuries of various degrees as a result of the continuous indiscriminate shelling of the Azerbaijani civilian population in towns and cities – Ganja, Bilasuvar, Tartar, Aghjabadi, Barda, Khizi – located inland farther away (50-250 kilometers) from the line of contact. In addition to the reported civilian casualties, close to 500 civilian objects, including private property, the water reservoir and the power plant in Mingachevir, the energy pipelines (Baku-Tbilisi-Ceyhan pipeline and South Caucasus Pipeline) delivering crude oil and natural gas from the Caspian Sea to Europe and the regional courthouse in the Tartar district, have been the target of indiscriminate attacks by the Armenian armed forces.

These latest events of the military aggression of the Armenian armed forces are continuation of the recent provocations against Azerbaijan. In July 2020, the Armenian armed forces shifted its aggressive expansionist policy further to the north from the Nagorno-Karabakh region and launched heavy artillery fire on the military positions and civilian objects killing military personnel and civilians in the direction of the Tovuz district of Azerbaijan.

At the root of the present-day Armenia-Azerbaijan armed conflict lies the Armenian policy of the illegal occupation of the historically Azerbaijani lands – the Nagorno-Karabakh region and seven adjacent districts, which are the internationally recognized territories of Azerbaijan. Today, almost 20% of the Azerbaijani territory is under the illegal Armenian occupation and as a result of the ethnic cleansing carried out against the Azerbaijani civilian population, more than 1 million refugees and internally displaced persons were forcibly expelled from their homes, 20,000 people were killed, 50,000 people were wounded or became disabled, and about 5,000 citizens of Azerbaijan are still missing.

In February 1992, an unprecedented massacre was committed against the Azerbaijani civilian population in the town of Khojaly. On the night of 25-26 February, the Armenian armed forces killed 613 civilians, including 106 women, 63 children and 70 elderly people. 1,275 residents were taken hostage, while the fate of 150 persons remains unknown to this day. The perpetrators of these heinous crimes against humanity have not been apprehended and brought to justice.

It should be specifically highlighted that all international diplomatic efforts, including the negotiations within the framework of the OSCE Minsk Group, for the peaceful resolution of the current armed conflict have failed to this date due to the unconstructive approach of the Armenian government and its leadership.

The government of Armenia fails to comply with the explicit terms of the United Nations Security Council Resolutions 822, 853, 874, 884 of 1993, which recognize Nagorno-Karabakh and adjacent districts as an integral part of Azerbaijan and demand for the immediate, complete and unconditional withdrawal of the armed forces of Armenia from the occupied territories of Azerbaijan, in addition to failing to fulfil a number of resolutions of the leading international organizations, such as the Non-Aligned Movement, the Council of Europe and the European Union.

Furthermore, the European Court of Human Rights in its judgment in Chiragov and Others v. Armenia (no. 13216/05, 16 June 2015) held that “Armenia, from the early days of the Nagorno-Karabakh conflict, has had a significant and decisive influence over the “NKR”, that the two entities are highly integrated in virtually all important matters and that this situation persists to this day. In other words, the “NKR” and its administration survive by virtue of the military, political, financial and other support given to it by Armenia which, consequently, exercises effective control over Nagorno-Karabakh and the surrounding territories…”.

The Republic of Azerbaijan in defending the inviolability of its borders against external threats and ensuring the human rights and liberties of all on its territories complies with all of its obligations and commitments under international law, including the 1949 Geneva Conventions. The government of Azerbaijan has declared that at all times it abides by the fundamental principle of international humanitarian law, which requires armed forces to distinguish between combatants and civilians, and between military objects and civilian objects. In addition, the Azerbaijani armed forces have affirmed their commitment to respect the absolute ban against targeting civilians or carrying out attacks that indiscriminately harm civilians or cause damage disproportionate to the anticipated concrete military advantage.

We stand by the efforts of the Azerbaijani government to restore its territorial integrity and ensure the safe return of all internally displaced persons to their homes by finally reaffirming their inherent dignity and fundamental human rights. By doing so, we will collectively achieve true and lasting peace in the region.

We look forward to continuing our multilateral efforts focused on strengthening the rule of law and safeguarding human rights and fundamental freedoms.”