Azerbaijan says Armenian statement on Shusha is yet another provocation 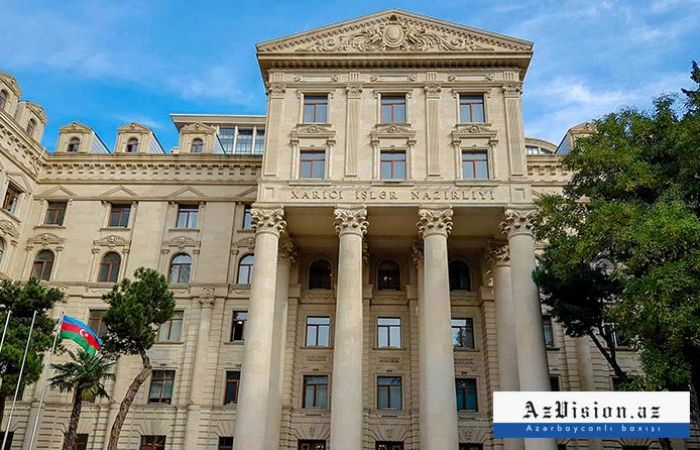 The statement by the Armenian Foreign Ministry on the targeting of the places of religious worship and cultural monuments in the occupied Shusha city by the Azerbaijani armed forces is yet another false accusation and provocation of Armenia aimed at diverting the attention of the international community from its deliberate shelling the densely populated residential areas, civilian infrastructures and cultural monuments in Azerbaijan, the Azerbaijani Foreign Ministry told AzVision.az.

The ministry said almost for 30 years, Armenia has pursued the policy of deliberate destruction of the Azerbaijani historical and cultural monuments in the occupied territories of Azerbaijan, aimed at removing any signs heralding their Azerbaijani legacy. “Recently targeting the second biggest city, as well as the center of the historical and cultural heritage of Azerbaijan, Ganja city in rocket strikes clearly demonstrated the long-standing policy of the vandalism of Armenia.”

Azerbaijan is among the countries where cultural diversity is felt clearly and openly, it is among the most religiously tolerant countries in the world, said the ministry, adding. “Unlike Armenia, which has committed cultural genocide, destroyed and desecrated the Muslim Mosques in the occupied territories, Azerbaijan attaches great importance to preserving the traditions of tolerance and the fact that the Armenian Saint Gregory Church in downtown Baku is fully refurbished and under State protection is a vivid example to that policy.”

“As officially declared by the Military Command of the Armed Forces of Azerbaijan, the targets of the Azerbaijani Army are the military infrastructures, fire positions and military units of the enemy. Azerbaijani armed forces undertake the counteroffensive measures on the sovereign territories of Azerbaijan in accordance with the international humanitarian law and Geneva Conventions.”

Baku reiterated that Armenia’s attacks directed at civilians, that caused indiscriminate or disproportionate harm to civilians and civilian objects in Azerbaijan amount to war crimes under international humanitarian law, for which Armenia bears the liability and which also incur individual criminal responsibility of the perpetrators.

“There is no doubt that all historical, cultural, religious monuments of Azerbaijan destroyed as a result of Armenia’s aggression will be restored as soon as the Nagorno-Karabakh and surrounding regions of Azerbaijan are liberated from the occupation,” it added.