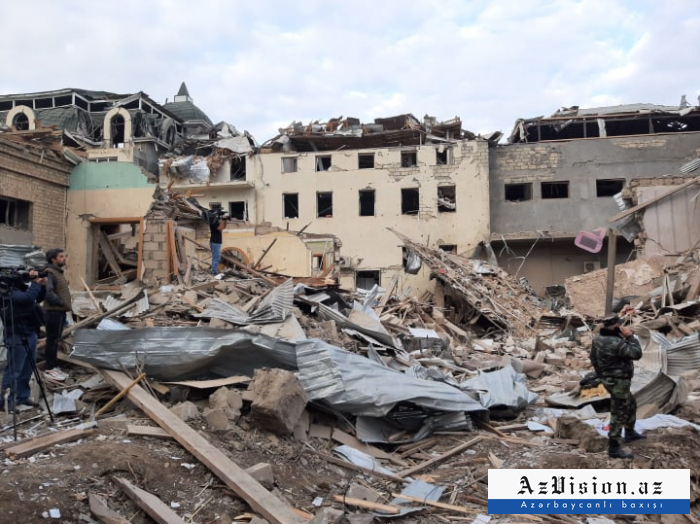 On October 12, heads of diplomatic corps, ambassadors, military attaches, and heads of representations of international organizations in Azerbaijan have arrived in the city of Ganja and eyewitness Armenian atrocities.

"As a result of heavy artillery fire opened on Ganja, civilians were killed and wounded, and our historical monuments, including the century-and-a-half-year-old Orthodox Church, were damaged", Haji Tahir Abbasov, a Trustee of the Imamzadeh Shrine and Representative of the Caucasus Muslims Office for the western region, told journalists in Ganja, Azvision.az reports.

He said that the ancient city of Ganja is known in the world for its great poets, scientists, hospitality and peaceful environment: "Armenia intends to commit a similar genocide with Khojaly in Ganja. The rockets targeted innocent children, women and elderly people. As a result of the latest missile strike, 9 civilians were killed, many people were injured and our houses were destroyed".

Stressing that Azerbaijan is a tolerant country, Haji Tahir said that there are many churches, mosques, synagogues and religious centres in Ganja: "One of the rockets fired from Armenia damaged the tomb of the 5th grandson of the ninth-century Islamic prophet in Ganja and the large mosque around it. Additionally, a rocket hit a century-and-a-half-year-old Orthodox church in Ganja and damaged the ancient building. This shows that Armenians do not respect any religion or belief, there is nothing sacred for them".