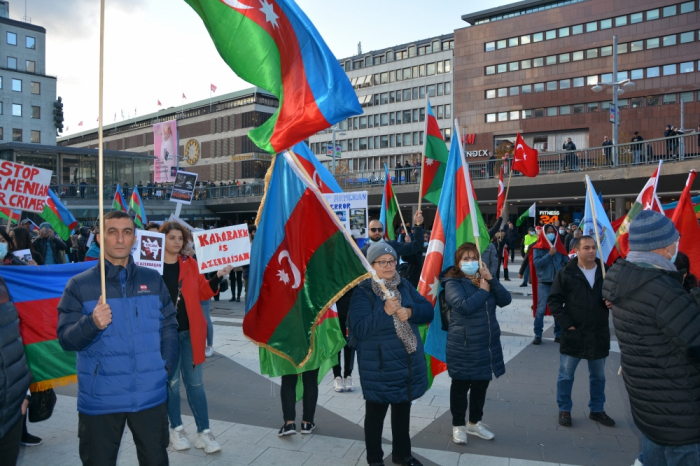 Representatives of Azerbaijani diaspora in Stockholm, Sweden have held a rally on Sergelakaden Square in protest against the aggression of the occupying Armenian army towards Azerbaijan and the following military provocations in Azerbaijan.

The protesters strongly condemned the provocations of the Armenian armed forces, the resumption of rocket attacks in Ganja, which resulted in the deaths of civilians, underage and women, as well as the destruction of civilian objects.

Azerbaijanis living and working in Stockholm took part in the action initiated by the Coordinating Council of Scandinavian Azerbaijanis and the Swedish Federation of Azerbaijan. The protesters expressed regret over the rocket attacks in Ganja and Mingachevir, the deaths of dozens of civilians in Ganja, including innocent children, and called on the world community not to turn a blind eye to the Armenian terror and to defend the fair position of Azerbaijan. During the rally, a car with a memorial plaque reflecting the realities of Karabakh circled around the square.

The Armenian army, violating the humanitarian ceasefire, on October 11 and 17, 2020 at night fired rockets on Ganja, the second largest city of Azerbaijan, outside the front-line zone. As a result of rocket attacks on the occupying Armenian army, residential buildings in the central part of Ganja were destroyed, civilian objects were seriously damaged, 23 people were killed, 83 civilians were seriously injured, and the city itself was seriously damaged.