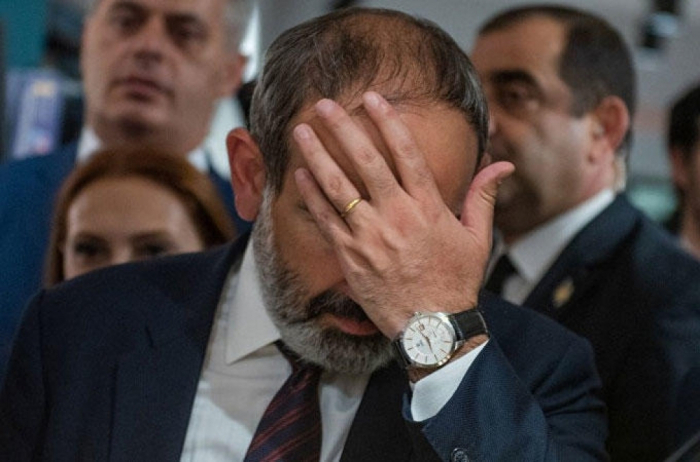 Armenian Prime Minister Nikol Pashinyan’s call to the Armenian people is especially noteworthy at a time when Supreme Commander-in-Chief of the Armed Forces of the Republic of Azerbaijan Ilham Aliyev reports about the successes of our brave Army and the liberated lands from occupation. Thus, Pashinyan's appeal to his people, who did not want to admit his defeat, indeed shows their defeat.

These views were expressed in an article by Khayal Isgandarov, a national security expert and officer of the Military Academy of the Armed Forces, entitled "The Mad Leader or Pashinyan’s Parkinson's Disease." We present the article.

On October 21, Nikol Pashinyan suggested a six-step plan: 1) create volunteer groups (minimum 30 people); 2) select a commander among them; 3) apply to the military commissariat where the commander lives; 4) pass coordination training in one of the military units; 5) go to the front to defend the "homeland"; 6) Win. Analyzing it carefully, we will see that this appeal is just an expression of despair. In fact, the last step sounds like "win", but it means "commit suicide". When the Azerbaijani Army took the superiority on the battlefield, Armenia bombed our settlements targeting the civilian population. It is also an indication of this despair. The analysis of the recent events shows that after the liberation of any city or settlement by the Azerbaijani Army, the Armenian army resorted to provocation and targeted our settlements. This action can be compared to the behavior of Hitler's army in the last months of World War II. In the last months of World War II, Hitler's foolish orders and weak decisions were in fact the result of his earlier mistakes. Pashinyan is now on the agenda with such wrong decisions. Perhaps Pashinyan did not think that the glorious Azerbaijani Army would advance so far. Therefore, the situation does not enable him to think normally and make decisions in accordance with people’s interests. Taking Armenians forcibly from the streets and sending them to fight in Karabakh is not in the interests of the ordinary Armenian people.

In the summer of 1944, Hitler's Nazi empire was in serious danger when Allied forces atacked from the direction of French Normandy. The Nazi army had built strong engineering barriers from the west coast of France to the coast of Norway. This "Atlantic Wall" was considered to protect the new German Empire from threats coming from Atlantic Ocean. Unfortunately, this protective "wall" was destroyed within a very short time. When the allied forces invaded the beaches of Normandy, Hitler thought that they would attack the city of Pas-de-Calais. Eight tank divisions of the Nazi army were placed in the area. The night before the attack, Allied forces used balloons to create the image of a large number of paratroopers stationed in the area. Thus, the allied forces did not attack the city of Pas-de-Calais, and by the time Hitler woke up in the afternoon (he did not allow the generals to disturb him while he was asleep), the allied forces were already occupying the beaches and advancing on French territory. Even Hitler did not let the most loyal generals come near him after getting frightened by the defeat on the beaches of Normandy and at Stalingrad a year ago. He used to have lunch and dinner with his advisers, but later he began to spend more time with his secretaries. In short, Hitler preferred to make decisions without listening to anyone's advice. Although the generals at the top of the Nazi army warned Hitler of the consequences of the war, he did not back down and dragged an entire nation into disaster. Hitler did not want people to talk about the grave consequences of the war. He did not want people to link the paralysis in Germany with his mistakes. It should be noted that the Armenian army was considering the engineering and fortification facilities built-in Nagorno-Karabakh "impassable." However, the glorious Azerbaijani Army overcome these obstacles within a day. While the Armenians expected the Azerbaijani Army to counterattack from the east of Nagorno-Karabakh, our brave army quickly penetrated to a depth of tens of kilometres, destroying Armenia’s defenses in the occupied territories, mainly from the north-east and south-east. Therefore, the strong engineering and fortification facilities built by Armenia on the Aghdam front practically lost their significance. The Azerbaijani Army, which has already amazed the whole world with its success, has pushed the Armenian Armed Forces in a corner in all directions. Undoubtedly, the generals of the Armenian army, who are more or less experienced in martial arts, inform Pashinyan about all possible disasters. Because the soldiers forcibly sent from Armenia to Nagorno-Karabakh are sent directly to death. However, Pashinyan, like Hitler, is dragging the Armenian people into the abyss with stupid decisions. By intimidating some and rewarding others, he turns the protesting generals into an instrument of his unstable policy. Today, it is very clear that Pashinyan can make any decision that he does not think about the outcome and fate. The launch of ballistic missiles at large settlements in cities such as Ganja, Mingachevir and Terter also stems directly from his provocative policy. Like Hitler, Pashinyan does not want locals to criticize him, does not return the corpses of the soldiers, which rot on the battlefields, to their families, calling them as missing, and creates militant groups by urging civilians to take up arms.

If a number of scientists and historians were claiming that Hitler suffered from Parkinson's disease (destruction of dopamine neurons in the central nervous system), it is possible to say that Pashinyan today suffered from the same or similar symptoms. However, reality enables us to argue that not only Pashinyan but also several million Armenians suffer from this disease. At the end of World War II, Hitler escaped and hid in a bunker in Berlin. Apparently, the Armenian people, who have already woken up, will not give Pashinyan this opportunity as Pashinyan’s policy will result in the military, the political and economic decline of the Armenians and will be written in black letters in Armenia’s history.