Rally held in Germany in protest of Ganja attack 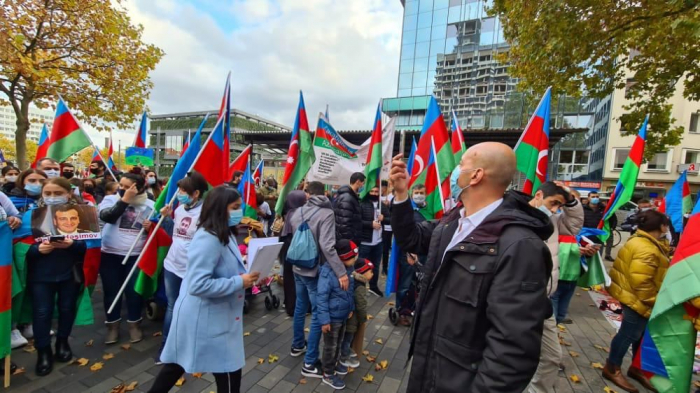 Azerbaijanis living in Bielefeld, Germany, held a rally organized by the German-Azerbaijani Cultural Society and marched from Bielefeld Hauptbahnhof station to Kundgebung Square.

The rally, that was attended by Azerbaijani and Turkish communities, was organized in protest of the killing of civilians by the Armenian army as a result of rocket fire on a number of regions and cities of Azerbaijan, including Ganja, AzVision.az reports citing the State Committee for Work with the Diaspora.

The protesters called the targeting of the civilian population by the Armenian armed forces a crime against humanity, saying that Armenia, pursuing a policy of aggression and terrorism, grossly violated the norms of international law.

The protesters chanted slogans in different languages: "Karabakh is Azerbaijan!", "Pray for Ganja!", "End Armenian terrorism!", "Civilians are untouchable!", "End child death!", "We say no to terrorism", "Do not support the occupying state!", " Armenia - follow UN resolutions! ” "Do not believe in Armenia" "End the occupation of Armenia!" "End to Armenian aggression" "End to Armenian terror".