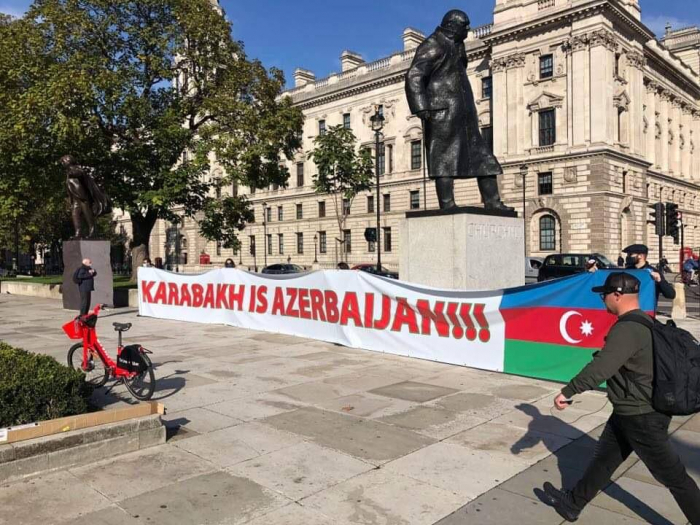 Because of the recent events in Nagorno-Karabakh, the Azerbaijani Diaspora in the UK has been holding several events in London and across the UK. Moreover, Azerbaijanis in the UK are deeply concerned about the coverage of the Nagorno-Karabakh events by the media. There is the frequent use of the words "disputed territories" between Armenia and Azerbaijan, which is misleading to the public and the international community. The Azerbaijani community non-stop has been raising awareness that Armenia is ignoring UN resolutions 822, 853, 874, and 884 which demand unconditional withdrawal of Armenian Armed forces from Azerbaijani territories. Nagorno- Karabakh is an integral and historical part of Azerbaijan.

Car rallies, demonstrations, protests have been happening in London since the beginning of the war to raise awareness of the problem. Azerbaijanis also appealed to various embassies, 'The Guardian"' and other organisations in the UK. They are also trying to make sure that there is no misinformation about the truth about the Karabakh. When conflict breaks out, there can be confusion and misreporting. This rarely helps create a situation where a peaceful resolution can be found. Therefore, the facts must be rigorously checked before news reports are released.

One of the members of the Azerbaijani community in the UK said: "Azerbaijanis tried to move on from these events and live in peace with their neighbours. But once the Soviet Union collapsed the idea of Nagorno- Karabakh breaking away from Azerbaijan began to escalate. Azerbaijan was always tolerant of other nationalities, and we made the Armenian population feel at home in Karabakh. However, the expansionist ideology of some of the Armenian Diaspora in Europe and America fuelled the idea of a Greater Armenia from the Black Sea to the Caspian sea. This war, which was started by separatist forces in Autonomic Nagorno- Karabakh was supported and led by Armenian armed forces in the late 80s and ended in May 1994, it led to the loss of thousands of lives, many Azerbaijanis lost their homes, livelihoods and were forced out of their homelands. Not only did the Armenians occupy Nagorno- Karabakh, but also the 7 adjacent regions around it."

The Armenian forces carried out atrocities and genocide of the Azerbaijani population in the of town Khojaly in 1992 when the entire town was massacred including children, women and the elderly. Azerbaijan has tried to resolve this conflict peacefully for nearly 30 years, but every effort was made by the Armenian government to jeopardise progress. Furthermore, Armenian armed forces have been breaking the ceasefire and attacking Azerbajan's villages regularly. They have destroyed all the historic Azerbaijani monuments in occupied territories and vandalised Azerbaijani cemeteries. The most recent outbreak of the military conflict is a direct consequence of another Armenian attack. Azerbaijan had to go into a military offensive to protect civilians and their livelihoods.