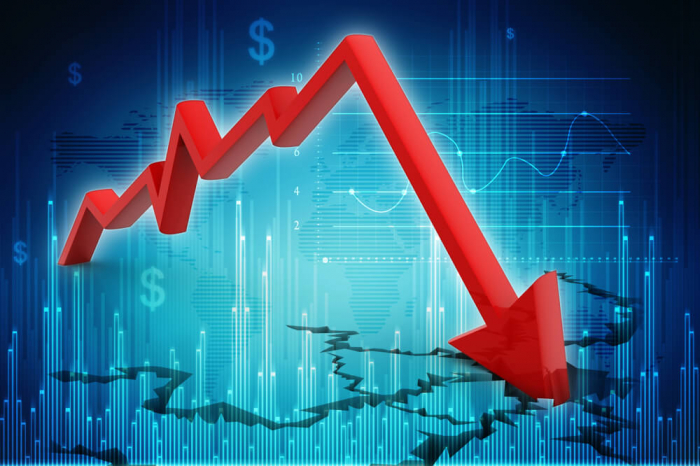 According to the forecasts of international organizations, this year the growth rates in Armenia are expected to be in the negative zone and low in the medium term, says the article of the Center for Analysis of Economic Reforms and Communication of Azerbaijan.

The article reads as follows:

Thus, the forecasts of Fitch Ratings in October 2020 show that the economic growth rate is expected to account for 6.2 percent this year and 3.2 percent next year. The reasons are the decreased economic activity due to the impact of the Covid-19 pandemic in Armenia and the resumption of the Nagorno-Karabakh conflict. The International Monetary Fund forecasts lower economic growth in the medium term as compared to 2019, explaining it with the fact that the country reached its potential level.

The industry, which is paralyzed at the moment, accounts for the largest share of value added in the economy. About two-thirds of the industrial output comes from the processing industry, and one-third from mining and other sectors. Low-productivity sectors, including food production, beverage production, tobacco production, and metal production account for the largest share in processing industry. Another important part of the economy is agriculture. By the end of 2018, agriculture accounted for 33 percent of employment and about 15 percent of GDP.

One of the main sources of funding for consumer spending is remittances from abroad the volume of which is decreasing. In 2019, the share of remittances in GDP accounted for 10.9 percent, which shows the economy’s dependence on external factors.

Since over the past 5 years imports has exceeded exports, net exports have failed to make a positive contribution to economic growth. Minerals, precious metals and stones, as well as other metals account for about 50 percent of total exports, which suggests that the economy is sensitive to changes in commodity prices. It is worth also stressing that the structure of exports by products has not changed significantly over the past 10 years.

In 2001-2008, the driving force behind economic growth was funds allocated to fixed assets. Thus, the increase in remittances from abroad in this period triggered a construction boom. As a result of the bubble burst in the real estate market in 2009, the role of investment, including foreign direct investment, in the economy began to decline. In general, foreign direct investment has been declining over the past 10 years, and its share in GDP decreased by 6.9 percentage and fell to 1.9 percent in 2019 as compared to 2009. Whereas this indicator was 5 percent in Moldova, 7.2 percent in Georgia, 7.9 percent in Albania and 9.4 percent in Estonia. In addition, when examining the structure of foreign direct investment in recent years, we see that more than half of foreign funds have been invested in mining industry and the energy sector.

Thus, a number of problems, including those related to institutions, competition, demography and infrastructure, must be solved to increase exports and investment and thus create a sustainable and competitive economy.

It is known that infrastructure is one of the main factors affecting a country's exports and its attractiveness for direct foreign investments. It is worth mentioning that motor ways account for 84% of the total cargo transports in the country and 88% of passenger transportation. Global Competitiveness Report (hereinafter - the Global Competitiveness Report) published in 2019 ranked Armenia 91st amount 141 countries according to the quality of roads. The main reason for the low quality of motor roads is the lack of sufficient funds from the public budget to construct and carry out maintenance of roads. In 2016, the ratio of road maintenance to GDP amounted to 0.14% (12 million Euros), which is lower than the target indicator set in the Armenia’s Development Strategy of Armenia (0.25% of GDP).

Due to the demographic and socio-economic situation in the country, the country faces decrease in the number of people with employment capacity. Due to the high level of youth unemployment, people with employment capacities leave the country forever. By the end of 2018, youth unemployment accounted for 31 percent for men and 46 percent for women. Another factor negatively affecting the working-age population is the decline in the number of newborns between the early 1990s and 2000s. In general, according to the European Bank for Reconstruction and Development, the working- age population decreased by 14.5 percent during the decade covering 2008-2017.

After the Velvet Revolution, a number of anti-corruption measures were taken in Armenia, including the initiation of investigations of corruption and tax evasion cases, as well as the arrest of some former government officials. At the same time, in the Global Competitiveness Report, Armenia did not advance its positions in terms of corruption (91st place among 141 countries). According to the results of the World Bank's public administration assessments for 2019, Armenia lags behind the countries of the region.

Despite the politician-business ties resulting from these governance problems, as well as the small size of the domestic market, and the closure of large parts of the country's land borders, early successes in the fight against corruption have spurred competition. Thus, due to the activities on reducing informal monopoly on imports and corruption in the customs authorities, the number of companies engaged in the import of food products has increased.