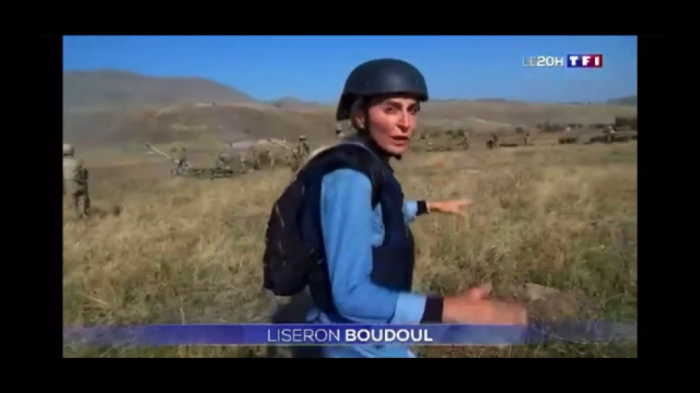 Recently, journalists, politicians and public figures covering the realities on Armenia-Azerbaijan Nagorno-Karabakh conflict in France have been threatened by Armenian organizations.

Calling to boycott any television channel or a direct death threat to a journalist is surprising and outrageous.

It is unacceptable for the Armenian lobby to suppress freedom of speech in a country like France, which values the freedom of expression.

Demonstrating a commitment to the fundamental principles of journalism, both the management of TF1 channel and Ms Boudoul, who provided impartial information about what happened, were threatened by the Armenian lobby after the broadcast.

Realizing that their lies have been exposed, the Armenian lobby uses threats and intimidation as they have failed to achieve their goals.

This once again demonstrates the real face of the Armenian Diaspora, its biased attitude against freedom of the press.

Note, once the war broke out in Nagorno-Karabakh, the reporters of the newspaper "Liberation" also received death threats from the Armenian lobby.

When the satirical magazine Charlie Hebdo in France was attacked for its cartoons of the Prophet Muhammad, all European countries, including France, stood up and showed solidarity.

Unfortunately, while all world leaders consider the attack on Charlie Hebdo as an attack on freedom of speech, they remain silent and indifferent to the death threats of ASALA, as well as Armenian terrorist organizations against journalists and MPs who support international law.

The point is that today the great powers use the idea of ​​freedom as a tool to influence other states.

It should be noted that the employees of TF1 channel and other above-mentioned media outlets who have been threatened by the Armenian lobby do not speak from the position of Azerbaijan in their reports.

However, we are showing an understanding of the news material prepared by foreign media representatives and respect their work.

Moreover, Armenians are openly threatening their allies, as well as, a number of great powers, who do not support them. Member of the Commission on Foreign Affairs of the French National Assembly (Parliament) and the French-Azerbaijani Friendship Group, MP Jerome Lambert shared a threatening article sent to him by members of the Armenian lobby on Twitter. The vice-president of the friendship group also said that the Armenian lobby in France threatened European politicians who did not express support to their position.

Today, we are witnessing how the Armenian lobby has repeatedly mobilized to silence journalists and politicians who tell the truth, and how it has manipulated freedom of speech and violated international law. All these confirm that the Armenians have chosen terrorism as a way out. Also, it was reaffirmed that terrorism which is one of the main methods of the Armenians, is an integral part of state policy in Armenia.

It is surprising to see the pressure on freedom of speech, an important indicator of democracy, in France, which has a long tradition of humanity and is considered the "cradle of democracy”. How it is possible to threaten is F1 TV Channel and French MPs, who support international law, with terrorism and ASALA, and in France, they can be opposed to freedom of speech and democratic principles. Honestly, looking at the bigger picture, a terrible damage has been done on freedom of speech and expression in European society.

We do hope that the response of France, which seeks human rights in other countries, to the death threats of ASALA and the Armenian lobby, that has always been supported by it, will show how French officials have always attached great importance the protection of human rights and freedom of speech.

International organizations working for the protection of freedom of speech, as well as working in the field of human rights, must respond to the pressure exerted by the Armenian lobby on the independent media and politicians in France. The Armenian terrorism spreads all over the world as the international community does not react on the terrorist incidents committed by Armenia.