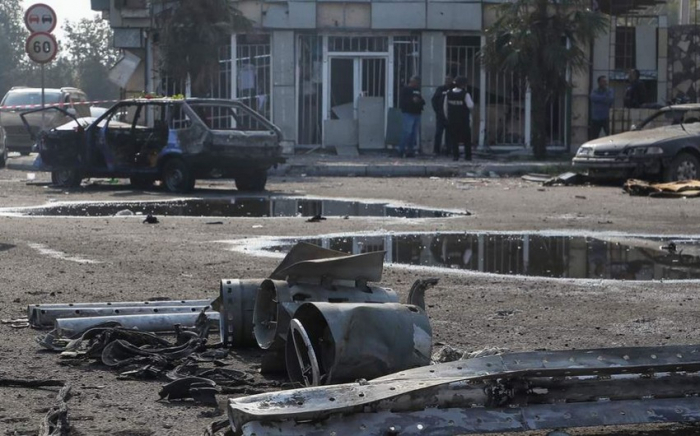 The Embassy of the Republic of Azerbaijan issued statement on missile attacks on civilians and damage of civilian infrastructure by Armenian military forces, AzVision.az reports.

"The Embassy of Azerbaijan would like to express its concerns regarding Armenia’s acts of aggression against residential areas of Azerbaijani cities which are filled with innocent civilians and are located far away from the conflict zone. Armenia violates international humanitarian law, 1954 Hague Convention and its Second Protocol of 1999, Fourth Geneva Convention of 1949, as well as The UN resolutions (822,853,874, and 884) regarding the occupied Nagorno- Karabakh and surrounding areas of the Republic of Azerbaijan. It is almost 30 years that Azerbaijan’s internationally recognized territories have been occupied by Armenia.

During years of 1988-1993, Armenian military aggression against Azerbaijan resulted in more than 18.000 persons killed and over 50.000 wounded. Although, Azerbaijan has a numerical superiority of the army, a numerical superiority of equipment and military weapons, the country still has repeatedly said that it is adherent of a peaceful solution to the conflict but in response to that, Nikol Pashinyan, Prime Minister of Armenia increases shelling on civilians living by attacking Ganja which is the second largest city of Azerbaijan. On October 27, late afternoon, armed forces of Armenia launched 300 mm “Smerch” cluster munitions rocket at the residential areas of Barda region which resulted in 21 civilians killed and more than 70 were injured.

As well as, continues shelling the Tartar city, its villages, Aghjabadi, and Goranboy by heavy artillery. Armenia launches rocket systems against Azerbaijan which cause enormous human suffering and damage to civil infrastructure as well as educational infrastructure, religious and cultural monuments, including cemeteries and buildings. As of October 28, in result of rocket shelling by Armenian forces 90 civilians were killed, including women, children and elderly, and more than 380 civilians have been hospitalized. Armenia’s attacks against civilians are a war crime and a crime against humanity perpetrated in a widespread manner.

The Embassy is confident that the international community will recognize these terroristic attacks and will put its efforts in urging the Republic of Armenia to refrain from these blatant actions which are in violation of the mentioned above laws."