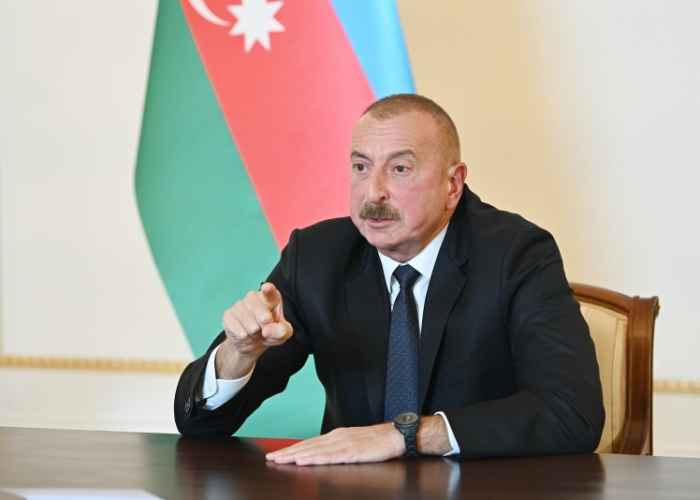 The Baku meeting of the Chamber of Commerce and Industry of the Cooperation Council of Turkic-Speaking States is a very significant event, Azerbaijani President Ilham Aliyev said.

The head of state made the remarks Monday during a meeting with Secretary General of the Cooperation Council of Turkic-Speaking States Baghdad Amreyev, President of the Union of Chambers and Commodity Exchanges of Turkey Mustafa Rifat and President of the Chamber of Commerce and Industry of the Kyrgyz Republic Marat Sharshekeev, AzVision.az reports.

“Given that Azerbaijan is currently waging a patriotic war, this meeting is of particular importance. We take this as a sign of support and solidarity, so thank you for that. This is an extraordinary meeting, and its main purpose is to provide moral support to our country,” he said.

President Aliyev pointed out that since the first days of the war, Azerbaijan has felt the support of Turkey and other fraternal and friendly countries.

“As you know, the President of the Republic of Turkey, my dear brother provided us with first support and made very important statements. He said that Azerbaijan was not alone and that Turkey was with Azerbaijan. After that, the heads of state and government of other friendly and brotherly countries – the heads of state and government of Pakistan, Afghanistan and other countries – supported us. I am glad that the Cooperation Council of Turkic-Speaking States has supported us and made a very important statement. This is a manifestation of unity and solidarity among Turkic speaking countries,” he added.

The head of state also noted that Azerbaijan has received great support on a global scale.

“The Non-Aligned Movement is the second biggest international organization after the United Nations, uniting 120 countries. The Organization of Islamic Cooperation has also supported us. This, of course, shows once again that ours is a cause of truth, we are restoring our territorial integrity, waging war on our own territory. At the same time, it is a sign of the attitude of the countries of these organizations to Azerbaijan,” President Aliyev concluded.