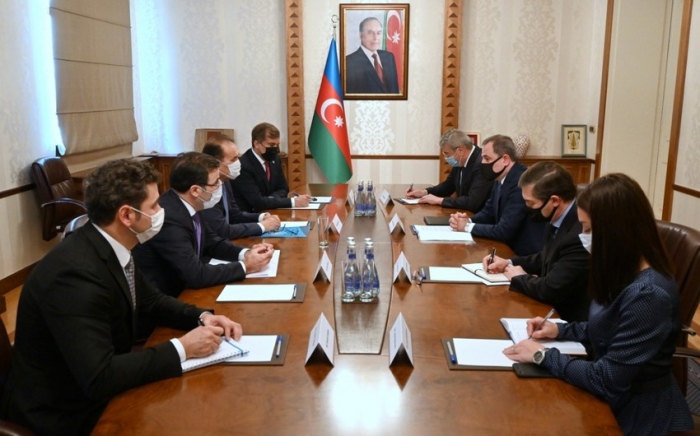 Azerbaijani FM  stressed the significance of the recent visits of the Secretary General of the Turkish Council to Azerbaijan in terms of supporting Azerbaijan's fair position that is based on international law.

Expressing gratitude for the unequivocal support of the Turkish Council for Azerbaijan's position so far, the Minister noted that the Secretary General's visit to Ganja city, which was subjected to rocket fire, was of special importance in terms of getting acquainted with the war crimes committed by Armenia against the civilian population and of high moral significance.

Minister Jeyhun Bayramov informed the other side about the destructive actions of Armenia. It was stressed that the illegal presence of the Armenian armed forces in the territories of Azerbaijan for many years posed a serious threat not only to Azerbaijan but to the entire region. It was noted that Azerbaijan, showing good will agreed to a humanitarian ceasefire three times, and all three times this humanitarian ceasefire was grossly violated by Armenia. It was brought to the attention of the other side that Armenia, which undertook not to target the civilian population in the Geneva talks, again violated this commitment and shelled the Azerbaijani settlements.

Noting the importance of the "New Era of Social and Economic Development of Azerbaijan" event organized by the Turkish Chamber of Commerce and Industry in Baku, the Minister said that restoration work would be carried out in all liberated lands of Azerbaijan and in this regard all efforts would be made by the state.

In his turn, Secretary General Baghdad Amreyev noted with satisfaction his meeting with President Ilham Aliyev during his visit. He said that the Turkish Council stood by Azerbaijan and unequivocally supported the country's just position.

Secretary General Baghdad Amreyev reaffirmed the importance of the event in Baku, noting that such events support the implementation of relevant projects in the liberated territories of Azerbaijan and thus the restoration of normal life in these areas.

The sides also exchanged views on preparations for the upcoming summit of the Turkish Council, as well as other issues on the agenda of the organization.