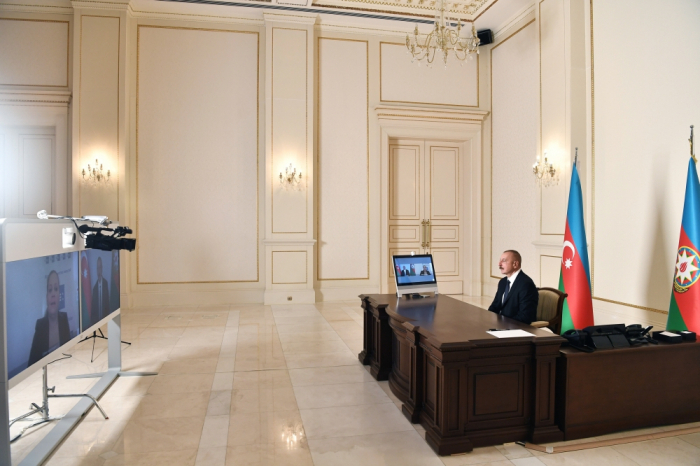 "I said that Minsk Group did not deliver any result. But at the same time, I said that I cannot completely ignore their activity and only criticize them. Because the basic principles which are on the table now, it is the principles which were elaborated with the assistance of the Minsk Group. So, they worked, they tried. But they did not use all their tools which they have in order to press Armenia to liberate the territories. Each of these countries unilaterally has enough leverages on Armenia, whether it’s military support, political support, economic support, diaspora support et cetera. But they did not use these instruments in their hands", President Ilham Aliyev said in his interview to the Spanish EFE news agency.

"Each of these countries unilaterally has enough leverages on Armenia, whether it’s military support, political support, economic support, diaspora support et cetera. But they did not use these instruments in their hands. They did not insist on implementation of the UN Security Council resolutions which they themselves adopted as permanent members of the UN Security Council. Therefore, the fact that there was no result, of course, demonstrates their unwillingness rather than they could not. If they could not, then who can? Can you find more powerful countries in the world? The three permanent members of the Security Council cannot influence small, impoverished, dependent Armenia? They just didn’t want. They wanted the situation to be stable, this is true.

They wanted a peaceful scenario. But when they saw that for almost thirty years there is no peaceful scenario, and the new Armenian government actually destroys the process by statements and actions, I think they should have acted.

And I called many times, talking with their leaders, talking with their high-ranking officials, ‘insert pressure on Armenia, put sanctions’. If you don’t want to put sanctions, at least pronounce it. Announce it that the sanctions will be imposed, otherwise there will be no other mechanism to influence this aggressor. So, today, I think they realized that what they were saying many years, that ‘there is no military solution to the conflict’ was wrong. And we changed that reality. There is a military solution. But today, what we are talking about let’s just close that page of military solution and move to the political solutions. So, military-political solution must prevail.

We are ready to stop today if Armenian prime minister says what I already demanded from him and peace process should be based now on implementation of the rest part of the basic principles which partly have been already implemented. We need a precise time-table for Kalbajar, Lachin and part of Aghdam to be liberated. And then, I think the peace will come to the region," the head of the state emphasized.