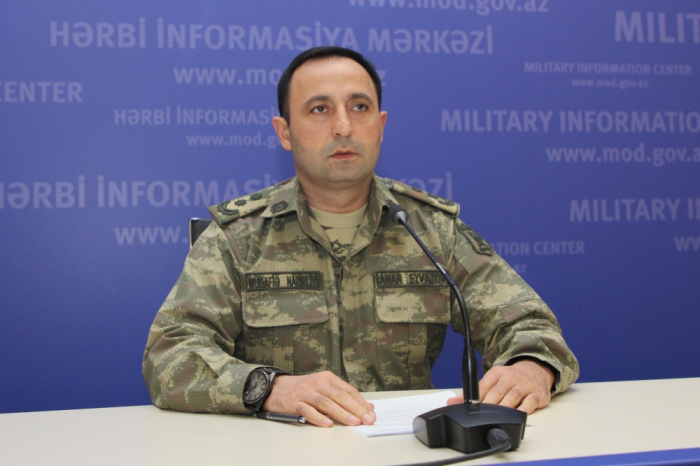 The Armenian Armed Forces, which over the past 24 hours have suffered big losses in manpower and military equipment during the battles in the direction of Agdere town of the front, are unable to make up for these losses, Spokesman for the Azerbaijani Ministry of Defense, Lieutenant Colonel Anar Eyvazov said during the briefing.

Units of Armenian armed forces fired at the positions of the units of the Azerbaijan Army located at the Armenia-Azerbaijan state border using mortars and small arms.
Starting from the night of November 5 to November 6 until 05:00 in the morning, the positions of our military units located in Tovuz, Gadabay, and Dashkesan regions of Azerbaijan were intermittently fired by the enemy from the direction of Berd, Chambarak, and Vardenis regions of Armenia.

The combat operations continued with varying intensity, mainly in the Aghdere, Aghdam, Khojavend, and Gubadli directions of the front. The enemy was forced to retreat suffering casualties on personnel and military vehicles in some areas of the front.

As a result of a special operation carried out by the units of the Azerbaijan Army in the Aghdere direction of the front, a military convoy belonging to the Armenian armed forces was ambushed and destroyed.
One commander vehicle, one communication vehicle, two "KamAz" trucks full of personnel and ammunition, and three "Ural" trucks with towed howitzers were completely destroyed on the Aghdere-Papravend route.
“There are problems in the management of the military units,” Eyvazov said. “The Azerbaijani soldiers break through the fortifications built by the Armenian troops for 30 years and are approaching the goal upon the order of the supreme commander.”

"The task of the Azerbaijani troops in a counteroffensive is to liberate the occupied lands,” the spokesman said. “The Azerbaijani troops are also fighting against foreign mercenaries. These are mainly foreign fighters of Armenian descent. The locals send foreign mercenaries forward, and then do not even take the bodies of the dead from the battlefield.”

“There is the information that the scattered groups refuse to go into battle,” the spokesman said. “Foreign fighters must realize that they have fallen into the trap of Armenia and they must lay down their arms. Today the Azerbaijani soldiers dominate on the battlefield and win. Victory is ours!"