Criminal case launched in connection with shooting down of Russian helicopter 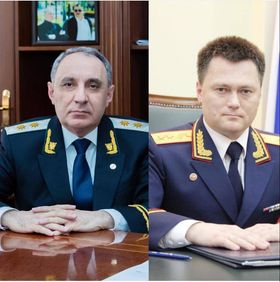 On November 9 at 18.30 in the Nakhchivan part of the Armenia-Azerbaijan border, Russia’s Mi-24 military helicopter was shot down over Armenia near the border with Azerbaijan killing two crew members and wounded one.

The Prosecutor General's Office of the Republic of Azerbaijan immediately launched an investigation into the incident and to thoroughly, fully and objectively investigate the details of the incident, the criminal case was initiated under Article 342.2 (negligence - negligent death of two or more people) on 09.11.2020 of the Criminal Code and the Military Prosecutor's Office of the Nakhchivan Autonomous Republic was entrusted with the investigation.

With the participation of military experts, the prosecutor's office inspected the missile launcher, as well as information systems, interrogated the servicemen of the military unit where the missile was fired, seized the necessary documents and carried out other necessary investigative actions.

At present, intensive investigative measures are being taken to identify the perpetrator or perpetrators and bring them to justice.

During the telephone conversation, the Prosecutor General expressed his condolences to his Russian counterpart on the death and wished the wounded serviceman a speedy recovery, as well as informed his colleague about the preliminary investigation of the criminal case and assured him that a full, objective and thorough investigation will be conducted.

Igor Krasnov reacted to the incident and thanked the Azerbaijani side for taking the necessary measures.

In addition, the Prosecutor General of the Russian Federation expressed satisfaction with the trilateral agreement signed on 10.11.2020, noting that the implementation of the provisions of the agreement will serve the interests of the parties, including the Azerbaijani people. Also, he expressed his hope that the deployment of peacekeeping forces in the region would play an effective role in achieveing peace and security.

Kamran Aliyev and his Russian counterpart expressed confidence that the close cooperation and friendly relations between the prosecutor's offices of Azerbaijan and Russia will continue to develop successfully in all directions.