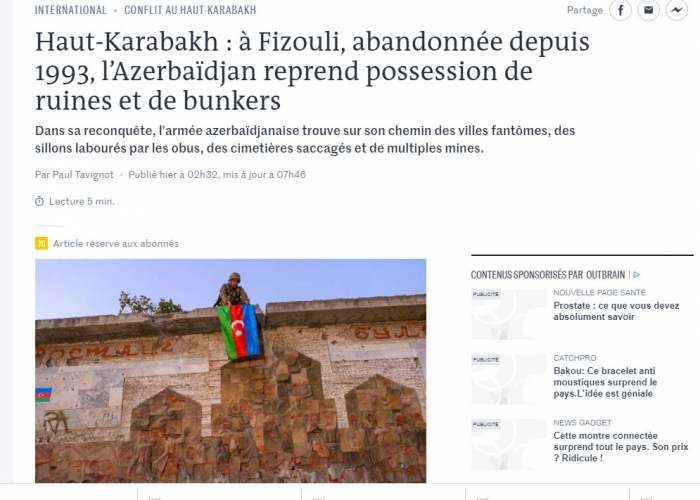 The French newspaper Le Monde published an article on the destruction committed by Armenian military units in the occupied territories of Azerbaijan, AzVision.az reports.

The author of the article, Paul Tavignot mentions the desecrated graves in the Fuzuli region and the Mardinli mosque, which was turned into a pigsty.

The author also stated in the article that when the Azerbaijani Army returned back to the liberated Fuzuli region,which had a population of 17,000 back in the 1990s, ruins welcomed them.

The article, which was mainly about the destruction of the Fuzuli region by Armenians, describes the impressions of the Azerbaijani officer who fought for his native land. "If the Armenians didn't need these lands, if they were going to destroy them, why did they expel us from our country?", said an officer named Said Natik.

In conclusion, Le Monde notes that Fuzuli returned to Azerbaijani control in mid-October after fierce battles. “It is possible to see full ammunition boxes on the streets which let us say that the Armenians mainly used the 122-mm Soviet-era D-30 cannon”, the article says.