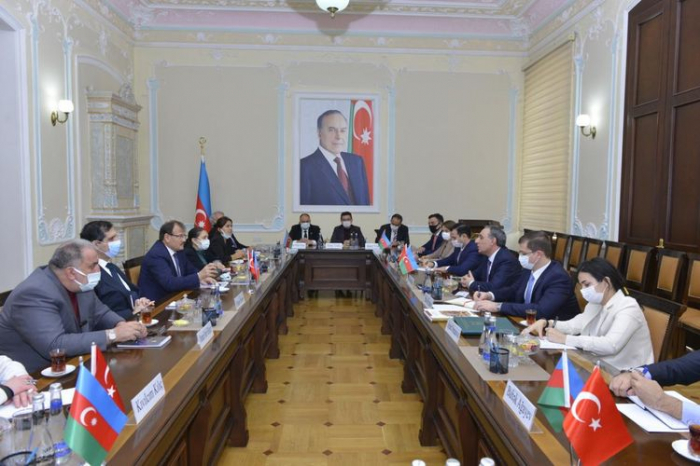 On November 14, Prosecutor General of Azerbaijan Kamran Aliyev received a delegation led by Chairman of the Human Rights Committee of the Turkish Grand National Assembly Hakan Cavusoglu, Ambassador Extraordinary and Plenipotentiary of Turkey to Azerbaijan Erkan Ozoral and MPs from various political parties and regions of Turkey, AzVision.az reports.

The sides discussed the development of relations between Azerbaijan and Turkey in the field of politics, economy, culture and others. They also highlighted the significance of the successful foreign policy pursued by Azerbaijani and Turkish president for the strategic cooperation between the two countries.

Kamran Aliyev also stated that criminal case was launched against the foreign mercenaries involved in the military operations by Armenia in the occupied territories of Azerbaijan, as well as against the members of the terrorist organizations like "Asala" and "PKK-PYD-YPG".

Chairman Hakan Cavusoglu offered condolences to the families of the victims stating that his delegation will prepare reports regarding the civilians, who got killed and wounded, and civilian infrastructures which were destroyed as a result of Armenian war crimes since 27 September, as well as the violation of human rights of refugees during the First Karabakh War and the damage caused to them.

A delegation led by Hakan Cavusoglu left for Ganja to get acquainted with the crimes committed against Azerbaijani civilian population. The delegation is currently on a visit.