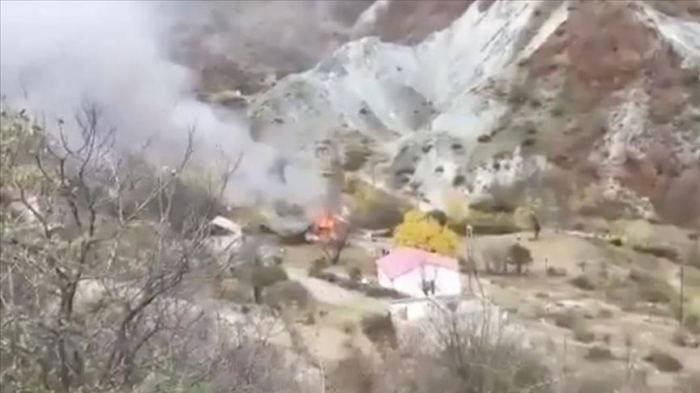 Armenians abandoning Kalbajar in line with an agreement brokered by Russia set fire to houses and forestry areas before leaving the region, which was under occupation for a total of 27 years.

According to a video footage on Russian media and social media accounts, Armenians apparently damage the environment and burn houses in Kalbajar, located northwest of Nagorno Karabakh which was occupied in 1993.

About 60,000 Azerbaijanis living in the region when it was occupied were forced to abandon their homes and they were scattered to various regions of Azerbaijan.

Yerevan also brought Armenians to Kalbajar -- where no Armenians had been living before -- and settled them illegally in the region.

On Nov. 10, Russia brokered an agreement between Armenia and Azerbaijan. According to the deal, the Armenian army is supposed to leave Kalbajar by Nov. 15.

Fresh clashes erupted on Sept. 27 and the Armenian army continued its attacks on civilians and Azerbaijani forces, even violating humanitarian cease-fire agreements for 44 days.

Baku liberated several cities and nearly 300 of its settlements and villages from the Armenian occupation during this time.

Before the second Karabakh war, about 20% of Azerbaijan's territory had been under illegal Armenian occupation for nearly three decades.

On Nov. 10, the two countries signed a Russia-brokered agreement to end the fighting and work toward a comprehensive solution.

Azerbaijani President Ilham Aliyev hailed the agreement as a "victory" for his country and a "defeat of Armenia", saying Baku's military success enabled it to gain an upper hand to end the three-decade-long occupation of its territory.

Meanwhile, Armenian Prime Minister Nikol Pashinyan said he had signed an "unspeakably painful" deal that allowed Azerbaijan to claim control over regions it took back in the fighting.

The Turkish leadership also welcomed the truce, terming it a "great victory" for Azerbaijan.