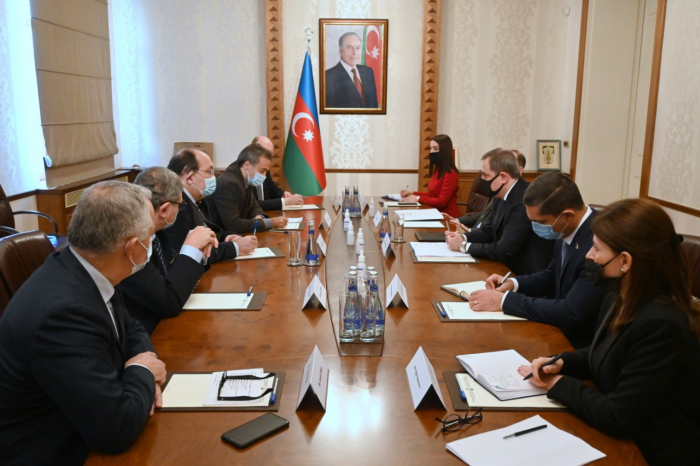 On November 14, 2020, the Minister of Foreign Affairs of the Republic of Azerbaijan Jeyhun Bayramov received a delegation consisting of members of the French National Assembly, three vice-chairmen and a secretary of the Azerbaijan-France Friendship Group, Azerbaijani MFA told AzVision.az

Welcoming the delegation, Foreign Minister Jeyhun Bayramov spoke about the existing friendly relations between Azerbaijan and France. The contribution of the members of the Azerbaijan-France Friendship Group to the development of these relations was also stressed at the meeting.

It was noted that with the current visit, including the visit of the deputies to Ganja city, where the members of the French National Assembly got acquainted with the situation on the ground about the deliberate targeting of civilians by Armenia, are of great importance in terms of conveying the truth to French society.

Stressing that some statements made by French officials on the conflict raise serious questions in Azerbaijani society, Minister Jeyhun Bayramov said that France, which is well-informed about the settlement of the conflict as the co-chair of the OSCE Minsk Group, should be neutral, based on the mandate of the co-chair.

The members of French National Assembly, in their turn, noted that the visit to Azerbaijan coincided with a historic time and the beginning of a new era for the country, and the visit was carried out in support of Azerbaijan. Noting that the visit was planned at a time of ongoing hostilities, the deputies expressed satisfaction with the signing of the statement on a complete ceasefire several days prior to the visit. Touching upon the statements of French officials which caused a concern in the Azerbaijan society, the deputies stressed that France's position is always based on international law and the country's leaders remain committed to these principles. They said that as members of the Azerbaijan-France Friendship Group, they were responsible for bringing the truth about Azerbaijan to the attention of French society.

The other side welcomed the signing of a joint statement on the cessation of all hostilities in the region, and stressed the importance of continuing the dialogue between Azerbaijan and Armenia, as well as within the Minsk Group.

At the meeting the sides also discussed other issues of mutual interest.