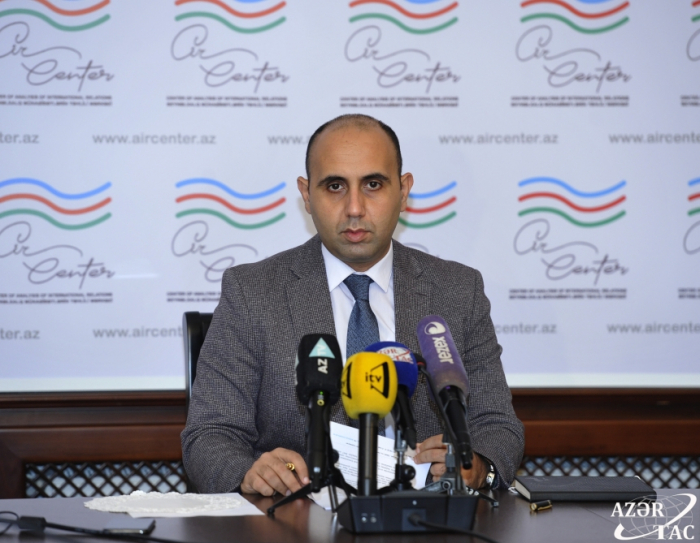 Armenian Prime Minister Nikol Pashinyan’s statement "Karabakh is Armenia" was the main issue that destroyed the negotiation process. Foreign media outlets, which expose Armenia's policy of aggression, provocations of the terrorist state against Azerbaijan’s civilian population, terrorist acts and cover Azerbaijan’s just position are being targeted by the Armenian lobby and threatened with death. The Armenian lobby continues to target the media, politicians and public activists and even those, who demonstrate a neutral, balanced position and don’t meet their interests. Interestingly enough, these inadmissible cases occur mainly in European countries.

These statements were emphasized in the report on the threats and pressure of Armenia and the Armenian lobby on international media and journalists covering the Armenian-Azerbaijani conflict in order to stifle freedom of speech, prepared by the head of Azerbaijan Journalists' Network Public Union Ayaz Mirzayev.

It was noted that on September 27, Armenia committed another military provocation against Azerbaijan. Armenian armed forces deployed in the occupied territories intensively fired on the positions of the Azerbaijani Army along the entire front line and nearby settlements using heavy artillery, resulting in casualties among the civilian population and servicemen. Based on international law, especially the right to self-defense, Azerbaijan has launched counter-offensive operations in the territories occupied by Armenia. As a result of 44 days of military operations, the territorial integrity of Azerbaijan was restored. On November 10, the Presidents of Azerbaijan, Russia and the Prime Minister of Armenia signed a joint statement. In accordance with the joint statement, Armenia undertook to withdraw its troops from Kalbajar, Aghdam and Lachin regions within the next 20 days. The peace process in the region will also be ensured with the joint participation of Russia and Turkey. Arrival of peacekeepers in the territory will be carried out simultaneously with the withdrawal of Armenian troops from the occupied territories of Azerbaijan.

Besides, it was highlighted that starting from 2018, the new military-political leadership of Armenia tries to completely destroy the negotiation process with deliberate actions. Armenian Prime Minister’s actions and statements, including attempts to change negotiation format, "Karabakh is Armenia and that’s it", ‘inauguration ceremony’ for the head of the illegal regime in Shusha, a provocative decision to relocate the so-called "parliament" to Shusha, statement on establishment of military volunteers, military exercises in the occupied territories, as well as the policy of illegal resettlement of ethnic Armenians in the occupied territories from the Middle East, especially Syria and Lebanon are evidences of it.

Despite the statements by the OSCE Minsk Group co-chairs on the inadmissibility of the status quo in the occupied territories, the destructive actions of the Armenian government were aimed at maintaining the status quo. Azerbaijan has always been committed to resolving the conflict at the negotiation table. However, Armenia violated the negotiation process with its unconstructive position. Over the past month, Armenia has violated the ceasefire three times on humanitarian grounds, achieved through the mediation efforts of the OSCE Minsk Group co-chairs. A day after the Moscow agreement of the foreign ministers with Russian President’s initiative - on the night of October 11, the Armenian armed forces launched a missile attack on residential settlements in Ganja, the second largest city of Azerbaijan. The Armenian armed forces continued to fire the frontline regions of Azerbaijan using banned weapons such as cluster and phosphorus munitions. Missiles were also fired at areas, far from the fighting zone.

Mirzayev noted that the war crimes committed by Armenia were widely covered by the world media. However, the Armenian Diaspora targets and puts a lot of pressure on media outlets, journalists and public activists and even those, who demonstrate a neutral, balanced position and don’t meet their interests.

In conclusion, it was noted that we are concerned about the open war of the Armenian lobby against free speech, freedom of expression and the principles of objectivity, impartiality and fairness of journalism. Death threats against journalists are contradictory with the European values and human rights. Those who make terror threats against freedom of speech and the press must receive their deserved punishments. At the same time, under international humanitarian law and UN Security Council Resolutions 1738 (2006) and 2222 (2015), journalists in armed conflict are classified as civilians. Therefore, journalists were protected as civilians under international humanitarian law, unless they took action adversely affecting their status as civilians.