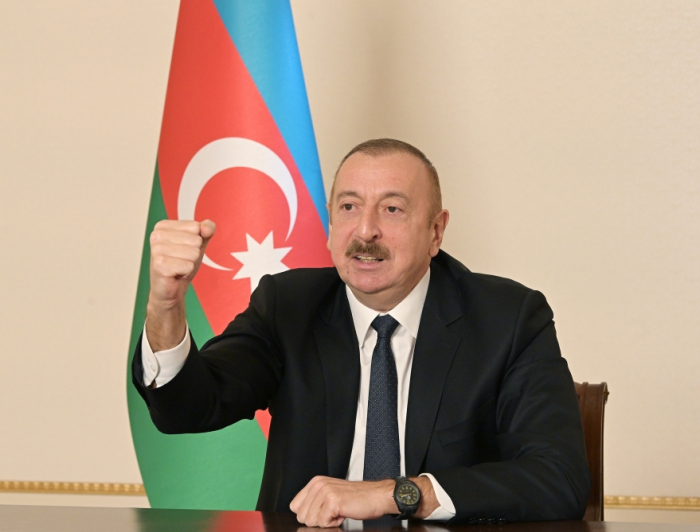 Azerbaijan will rebuild Kalbajar, the villages, the city of Kalbajar, President Ilham Aliyev said as he addressed the nation, AzVision.az reports.

President Aliyev stressed that the hated enemy cut down, looted and sold these trees.

“Look at the ugly things they have been doing in recent days, burning forests to create an environmental catastrophe. These thieves cut down forests and take them to Armenia for sale. They burn down houses they did not build. They entered the houses of the people of Kalbajar, broke into them and lived there. They burn down schools and kill pets they can't take with them. See who we were facing, what savages we were facing! I repeat, and I will say this every time that our victory is not only a victory over the Armenian state. We have also destroyed Armenian fascism,” he added.

The president noted that Kalbajar will be restored, let no-one have any doubts about that, and life will return there.

“Agriculture will develop in Kalbajar, especially livestock breeding. We have large pastures there. Kalbajar has ample natural resources. The enemy has brutally exploited these resources. In Soviet times, Istisu water, which was popular throughout the Soviet Union, was produced in Kalbajar. Istisu is under our control again now. It used to be a big resort. The hated enemy has destroyed everything. There are images of that and everyone can see them. We will restore all of that, we will rebuild Kalbajar, the villages, the city of Kalbajar. I have ordered to prepare a master plan for the reconstruction of the city – not only in the city of Kalbajar but also in all other cities, and life will return there,” President Aliyev concluded.