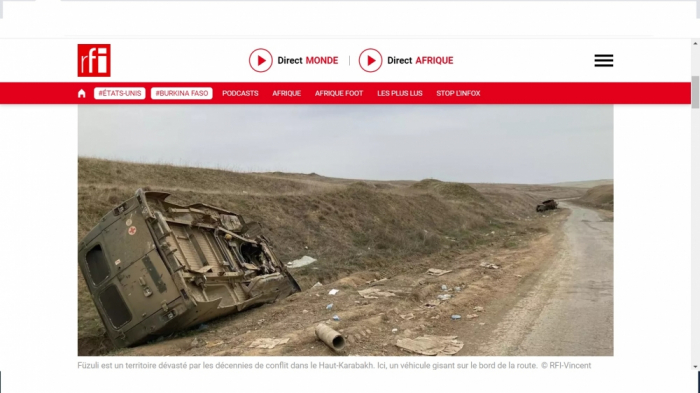 French international radio "RFI" broadcasted a reportage from the Fuzuli region of Azerbaijan which was recently liberated from the Armenian occupation, AzVision.az reports.

It is noted in the reportage that Fuzuli, which has been under the Armenian occupation for 30 years, is reminiscent of an empty desert. "The region, which now only possesses the traces of war, was liberated from occupation by the Azerbaijani armed forces on October 17 in 2020".

The French correspondent also emphasized that the Armenian military equipment destroyed by the Azerbaijani Army in Fuzuli belongs to the Soviet period. "Instead, in recent years, Azerbaijan has allocated a sufficient budget for the military and provided the army with modern equipment", the correspondent added.

At the same time, it was noted that the residents of Fuzuli region, who want to return to their homes, will have to wait for several years for the clearance of the lands from mines, as well as for the establishment of housing infrastructure there.

"No one had lived there for a long time and the city consisted only of ruins", said the reportage.