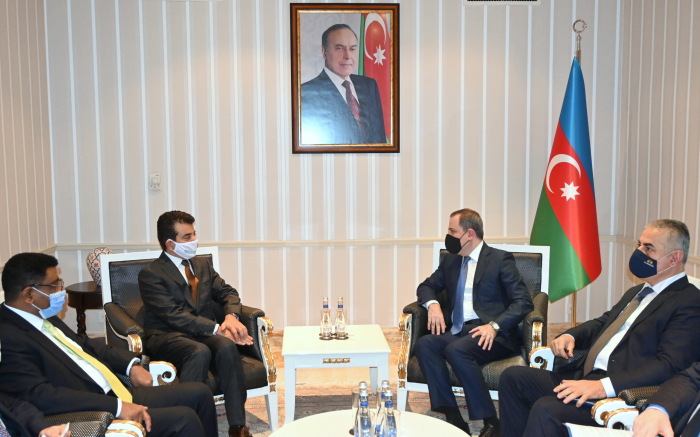 Welcoming the Director-General, Minister Bayramov stressed the high level of cooperation between Azerbaijan and the ICESCO. Noting that Azerbaijan has always paid great attention to the protection of historical, cultural and religious monuments in its territory, the minister highlighted the activities of the government in this field.

The support for Azerbaijan's position based on international law, especially the high appreciation of the statement made by the ICESCO during the 44-day Patriotic War was brought to the attention of the Director-General.

Drawing attention to the destruction and annihilation of historical and cultural heritage in the liberated territories of Azerbaijan, the minister noted that within recent decades, Azerbaijan has made numerous appeals to the relevant international organizations on this issue. It was noted that the trip of the ICESCO Director-General to the liberated territories of Azerbaijan during his current visit, created an opportunity to get acquainted with the situation in these territories.

Director-General Salim bin Mohammed AlMalik evaluated his visit as successful. He stressed that the visit was fruitful not only in terms of meeting with high-ranking officials but also in terms of getting acquainted with the situation in the liberated territories.

It was noted that during the acquaintance with the area the scale of the destruction, including the annihilation of religious monuments, cemeteries, museums, houses and other buildings, clearly demonstrated that this destructive policy has been purposefully pursued for decades.

The sides also exchanged views on the future prospects of Azerbaijan-ICESCO cooperation.