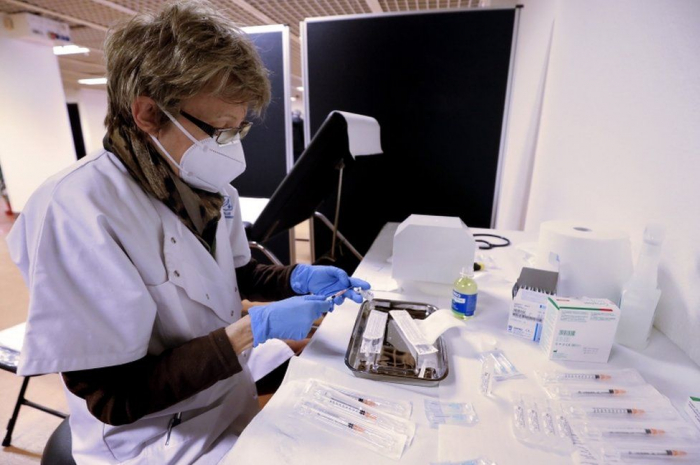 Several EU countries are receiving significantly fewer doses of the Pfizer coronavirus vaccine than expected, after the US firm slowed shipments.

Six nations called the situation "unacceptable" and warned it "decreases the credibility of the vaccination process".

Pfizer said the reduced deliveries were a temporary issue.

In a statement on Friday, the drugmaker said shipments were being affected by changes to its manufacturing processes designed to boost production.

"Although this will temporarily impact shipments in late January to early February, it will provide a significant increase in doses available for patients in late February and March," Pfizer said.

The company said its production upgrades would also have a "short-term impact" on the delivery of vaccines to the UK.

Despite this, the UK government said it still planned to hit its target of vaccinating all priority groups by mid-February - about 15 million people.

The vaccine from Pfizer is not the only candidate available in the UK, with the University of Oxford and AstraZeneca jab also currently being rolled out.

The EU is not wholly reliant on the Pfizer jab either, having approved a vaccine manufactured by US company Moderna for use. Still, the development is expected to slow the pace of vaccination programmes.

The German health ministry called Pfizer's announcement surprising and regrettable, noting that it had committed to binding delivery dates until mid-February.

EU Commission President Ursula von der Leyen said she had been assured by Pfizer's chief executive that all orders guaranteed for delivery in the first quarter of the year would arrive.

The pledge may do little to soothe European governments battling to subdue a fast-spreading Covid-19 variant first detected in the UK.

About a third of the 27 EU governments reported having "insufficient" vaccine doses at a meeting this week, Reuters reported, citing a participant.

Lithuania said it would now get only half as many Pfizer vaccine doses as promised until mid-February.

Belgium said it expected to receive about half the planned doses in January. Canada is also affected, because its vaccine supplies come from a Pfizer factory in Belgium.

Norway, which is not an EU member, said on Friday that Pfizer was temporarily reducing the number of vaccine doses delivered to the country as of next week.

The Norwegian Institute of Public Health said in a statement that it could supplement the loss using "emergency stock". "The stock we now have will be able to compensate for a reduction in the planned deliveries for a few weeks ahead," it said.

Which other vaccines is the EU buying?

As well as Pfizer-BioNTech, the European Commission has reached agreements with five other pharmaceutical companies to purchase hundreds of millions of vaccines, once they pass clinical trials:

The Commission concluded initial talks with another company, Novavax, for up to 200 million doses.

Elsewhere in the world, Turkey said it had vaccinated half a million people in two days with vaccines developed by China's Sinovac Biotech.

The figures suggest Turkey vaccinated more people on the first day of its roll-out than France did in almost three weeks.

The French government faced a storm of criticism after it emerged that only 500 people had been vaccinated in the first week of the roll-out, which began in late December.

Vaccination efforts have since stepped up, though, with 388,730 people receiving at least one dose so far, according to CovidTracker.

In the US, President-elect Joe Biden on Friday unveiled an ambitious plan to ramp up vaccinations against Covid-19 when he takes office on 20 January.

Mr Biden said his administration would set up new mass vaccination centres and hire extra health workers to achieve his target of inoculating 100 million Americans within his first 100 days in office.

The incoming president made the announcement as the Centers for Disease Control and Prevention (CDC) issued a stark warning about the spread of a highly transmissible coronavirus variant in the US.

Efforts are under way to inoculate 1.3 billion people against the disease, starting with healthcare and frontline workers. Two vaccines - Covishield (the local name for the Oxford-AstraZeneca vaccine) and Covaxin - are being used in India.