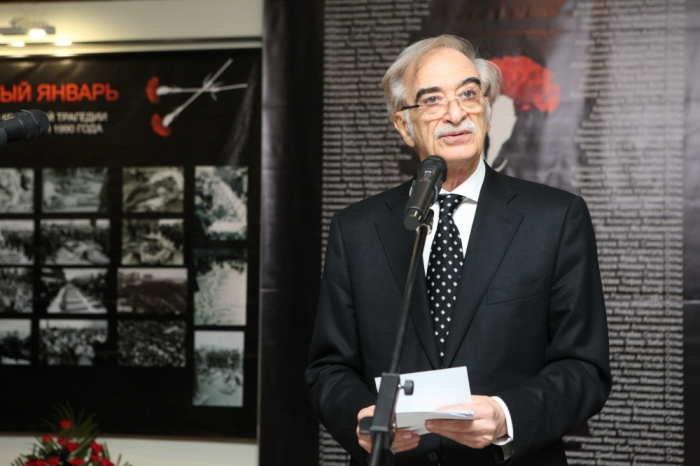 “31 years have passed since that terrible night. No matter how many years pass, the people of Azerbaijan will never forget that night,” Azerbaijani Ambassador to Russia Polad Bulbuloglu said at an event dedicated to the January 20 tragedy in Moscow.

Ambassador Polad Bulbuloglu first laid flowers at a bas-relief of national leader Heydar Aliyev and a stand set for the innocent victims of the 20 January tragedy at the embassy.

The diplomat noted that the liberation movement in Azerbaijan began in 1988 in protest of the deforestation of Topkhana, and our people gathered to protest against this event in Freedom Square. Fearing this wave of protests, the Soviet government launched an armed attack on the civilian population in Baku. Those terrible days will never be forgotten. The ambassador noted that on January 21, 1990, national leader Heydar Aliyev and his family members visited the building, where our embassy is located and protested against the Soviet leadership for the first time.

"At that moment, such a step required great courage and bravery. The great political figure Heydar Aliyev understood that the January 20 tragedy must be given a political assessment. With the victory of Azerbaijan in the Patriotic War, Heydar Aliyev's wishes came true, and these dreams were realized by President Ilham Aliyev. I was very excited and affected when statues of prominent Azerbaijani figures were brought to Shusha with President Ilham Aliyev’s participation," Bulbuloglu said.

Emphasizing that the revenge of the martyrs of January 20 was taken in the 44-day war, Bulbuloglu added: “We are proud that Azerbaijan won the 44-day war, the lands of Karabakh, including the city of Shusha were liberated from occupation. President Ilham Aliyev has declared Shusha the capital of culture. The revenge of our martyrs was taken. May God have mercy on them. Karabakh is Azerbaijan! ”