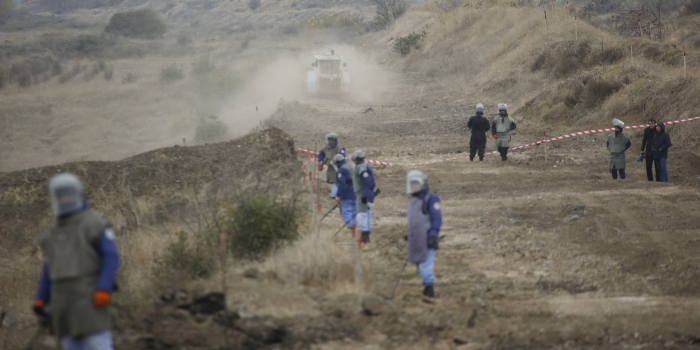 To date, more than 2,200 hectares of cultivatable land have been demined and cleared of unexploded ordnance in Azerbaijan's Jabrayil, Fuzuli, and Aghdam districts, Deputy Head of the Department of Engineering and Reinforcement Work and Engineering Troops, Colonel Jeyhun Jafarov, said on Tuesday, AzVision.az reports.

“According to the instructions of the Supreme Commander-in-Chief, after the end of the Second Karabakh War, subdivisions and units of the engineering troops completed such tasks as clearing the territories from mines and unexploded ordnance, building new and restoring existing roads, as well as neutralizing explosive substances,” said Jafarov.

“At the same time, sapper groups that were created in coordination with other relevant departments cleared mines and unexploded ordnance in areas where communication lines pass. Moreover, the engineering troops are engaged in the restoration of the bridges blown up by the Armenian side,” the colonel added.