France shuts down borders for most non-EU countries 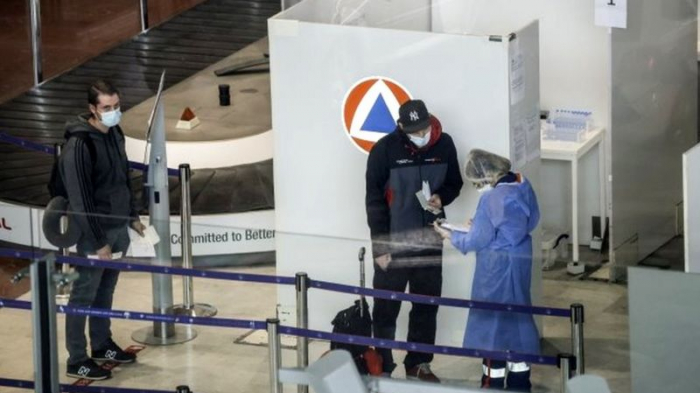 France has imposed new Covid-19 border restrictions, but has once again resisted a new nationwide lockdown.

But the measures were seen as mild and favouring the economy. Some doctors fear they will not curb infections.

The new border restrictions will affect the UK, now no longer in the EU, but the French transport minister clarified on Twitter that hauliers transporting goods to or from the UK would not be affected.

What are the new border measures?

Mr Castex said that from Sunday, apart from exceptional reasons, "any entry into France and any exit from our territory to or from a country outside the European Union will be prohibited".

A number of countries are exempted, as they are not considered at risk. They are Australia, South Korea, Japan, New Zealand, Rwanda, Singapore and Thailand.

In addition, arrivals from inside the EU, and several other neighbouring states - Andorra, Iceland, Liechtenstein, Monaco, Norway, San Marino, the Vatican and Switzerland - will have to present a negative polymerase chain reaction (PCR) test.

All arrivals, not just by air and sea, but by land too, must comply with the test rule.

There are exemptions, including cross-border workers and hauliers, and other groups such as students, health workers and diplomats, although the list is not fully defined.

The new Covid variants are the main motivating factor, and travel to the UK, which has been hit by the UK - or Kent - variant, is "strongly discouraged".

There were few specific details about how the measures would be enforced, particularly on those arriving by road and having to provide test results.

What are the other measures?

The shopping centre rule affects some 400 malls and 25,000 businesses. Small traders were relieved not to be be included.

media captionPolice in Paris ensure shops close at 6pm as France begins a new curfew to tackle Covid-19
The other measures appeared more general, with French media saying they were fairly mild and an attempt to slow the virus without harming the economy further.

For now, schools remain open across the country.

Some health sector experts were unconvinced the measures would be of use in controlling rising infections.

Mahmoud Zureik, professor of public health at the University of Versailles-Saint-Quentin, told French news network BFMTV: "Unfortunately I fear it is too late. It is not enough."

The threat of a third national lockdown in France has loomed large all week, following warnings by top health officials that one would be needed amid high hospital rates and the spread of new variants.

But there is a lot of public opposition - more than 50% in an Elabe Institute poll oppose a strict lockdown, compared to 93% support last spring.

Mr Castex said in his televised statement on Friday a lockdown could still be prevented.

"We know the grave impact [of a lockdown]. Tonight, looking at the data of the past few days, we consider that we can still give ourselves a chance to avoid one," he said.

"The coming days will be decisive. Let's be very vigilant."

Where is France with the virus?

France reported 820 new deaths on Friday, taking the total recorded nationally to more than 75,000. It has recorded the sixth highest number of infections in the world.

More than 25,000 people are in hospital with the virus - including more than 3,000 in intensive care - but Mr Castex said the health situation was "better controlled in France than in many of our neighbours".

Health Minister Olivier Véran warned this week that the new, more transmissible variants were now "actively spreading" in France, despite the current restrictions.

Friday's announcement also comes amid a growing row between the EU and vaccine companies about supply shortfalls.

French officials say they have given first doses to 1.45m people so far, but delivery shortages from Pfizer and Moderna are further slowing their rollout.

What are other countries doing?

From Saturday, Germany has banned most travellers from countries hit hard by new variants. The countries are the UK, Ireland, Portugal, Brazil, South Africa, Lesotho and Eswatini.

The move is expected to last until 17 February.

Also from Saturday, the Czech Republic has banned non-essential entry into the country, again to try to curb the new variants.

Portugal on Thursday banned non-essential overseas travel by air, land or sea for its citizens for a fortnight.

Belgium on Wednesday banned non-essential trips out of the country until 1 March.

In contrast, Italy said on Friday it would move more areas into less-restrictive rules from Monday, despite health officials warning it was risky. No areas would be classified as "red", which brings tough travel and business restrictions.