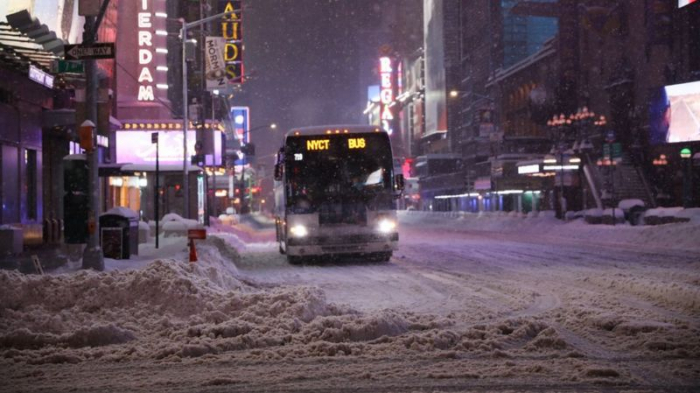 A huge winter storm has pummelled the US east coast, grounding flights, shuttering vaccination sites and bringing New York City to a standstill.

By Monday afternoon as much as 19in (48cm) of snow had already fallen in parts of New Jersey and Pennsylvania, and 17in (43cm) in New York City.

New York City and New Jersey have both declared a state of emergency.

The US National Weather Service said the storm will move up to New England, before tapering off on Tuesday.

Wind gusts of up to 50mph (80km/h) are also forecast for several days creating a blinding, blowing snow storm.

New York state Governor Andrew Cuomo declared a state of emergency in New York City as well as 44 other counties.

"This is a dangerous situation," he said in a press conference on Monday. "A life-threatening-situation. Expect closures. It's going to get very bad very quickly."

In New York City vaccinations will be cancelled through to Tuesday, as Mayor de Blasio has said it is "not safe" for older residents to go outside in the blizzard conditions.

"We're in a local state of emergency," Mr de Blasio said at a news conference. "I'm fearful that this tough situation we have now could get worse."

Snow hit the west coast last week, with some parts of California experiencing more than 6ft (2m) of snowfall.

In Washington DC, many have enjoyed the snow in front of the capital's iconic landmarks. After a day of snow on Sunday, the winter weather advisory from the National Weather Service has been extended until Tuesday at midnight in the DC area. Freezing rain and sleet showers are expected through the day.