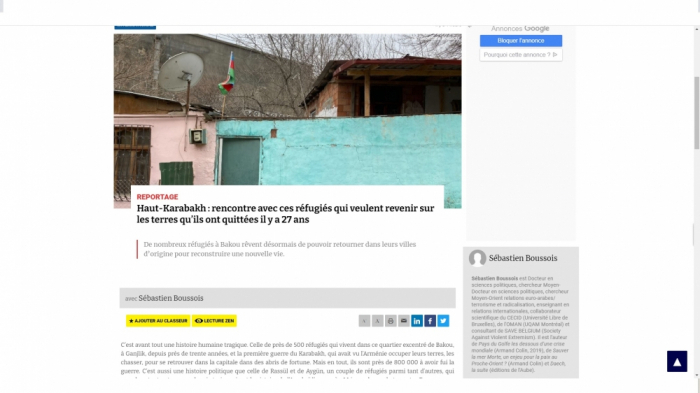 Azerbaijan, which won the 44-day war with Armenia, liberated its territories recognized by international law, reads the article "Nagorno-Karabakh: a meeting with IDPs who wanted to return to the lands they were expelled 27 years ago" published in France's "Atlantico" portal

In his article, journalist Sebastian Bussua calls the expell of about 800,000 Azerbaijani IDPs, whose lands were occupied by Armenia from their homes during the First Karabakh War as a "tragedy".

"Hundreds of thousands of Azerbaijanis, whose lands were liberated, live with the desire to return to their homes in Zangilan, Gubadli and other districts soon. They dream of building a new life in 30 years", the article says.

The journalist also talks about the destruction of liberated cities and villages by Armenians. He states that settlements have become a nightmare of death, mosques have been used as stables, and libraries have been looted adding that the Azerbaijani government has started rebuilding infrastructure in the destroyed areas.

An article by a French journalist about the desire of thousands of IDPs living in Baku to return to their homeland also covered the views of some of them. Rasul and Aygun spoke about the lives of IDPs and the tragedies of Azerbaijani people displaced from their native lands as a result of the Armenian occupation. They noted that they lived with the desire to rebuild their villages and houses destroyed by the Armenian occupation.

They noted that not all IDPs in history have had such an opportunity, they are looking forward to returning to their homeland, and talked about their plans to return and build a new life.

The French journalist notes that he has not observed any hatred against Armenians during his conversation with the Azerbaijani IDPs. "The previous harmony in the region will be restored by the time of progress", he adds.