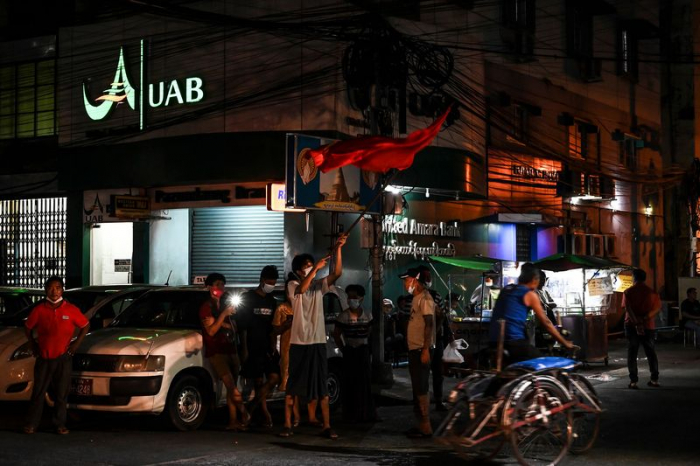 Myanmar’s Ministry of Transport and Communications sent a notice to all telecommunications companies saying Facebook and its services should be made unavailable until Feb. 7 in order to maintain “stability” in the country. Facebook Inc.is aware the social media platform “is currently disrupted for some people,” a company spokeswoman said.

“We urge authorities to restore connectivity so that people in Myanmar can communicate with their families and friends and access important information,” the Facebook spokeswoman said in a statement. Facebook is one of Myanmar’s most prominent social-media platform, even though the company doesn’t disclose the number of users in the country.

Telenor Myanmar, one of two wholly foreign-owned mobile operators in the country, said in an overnight statement it would comply with the directive, but expressed “grave concerns” over its impact on human rights. “While the directive has legal basis in Myanmar law, Telenor does not believe that the request is based on necessity and proportionality, in accordance with international human rights law,” the company said.

The move comes after residents in Yangon on Wednesday night protested for a second straight evening, singing songs, banging on pots and honking car horns in protest of the military coup. Earlier on Wednesday, authorities filed criminal charges against former leader Aung San Suu Kyi for possessing illegally imported walkie-talkies, an apparent violation of an import-export law. She faces as many as three years in prison if convicted.

Suu Kyi has called on supporters to resist Myanmar’s generals, who seized power on Monday after claiming without presenting evidence that her landslide victory in November’s election was tainted with fraud. The military has meanwhile pledged to hold elections after a yearlong state of emergency as part of a larger effort to project stability in the country.

With a block on Facebook in place, protesters temporarily lose access to a platform that is central to a pro-democracy “Civil Disobedience Movement,” which gained nearly 200,000 followers in two days. Activists including medical professionals announced on Wednesday that more than 70 hospitals and medical departments would stop work in protest of what it called an “illegitimate” government.

“We need to boycott them by not wasting our money on these evils,” one supporter posted in reference to the military’s vast business interests in the country. The coup “is going to effect every single one of our lives.”

In addition to Suu Kyi, former President Win Myint was also charged, but for breaching the natural disaster management law over an election campaign rally that police say violated Covid-19 restrictions and faces. He faces the same penalty. NLD lawmakers released a statement demanding the immediate release of the two, recognition of the 2020 election results and the removal of all barriers to holding a new parliamentary session.

On Wednesday, the Yangon Stock Exchange resumed trading for the first time since the coup while businesses largely remain open. Still, there are concerns that the coup may prompt foreign investors to halt operations or pull out from the country entirely.

“Foreign companies had hoped the end of military rule in 2011 would improve the business environment in one of Asia’s key resource-rich markets, but we expect the coup to damage Myanmar’s economic recovery plans and erase foreign investor interest,” Kaho Yu, senior Asia analyst at political risk consultancy Verisk Maplecroft, wrote in a research note to clients.