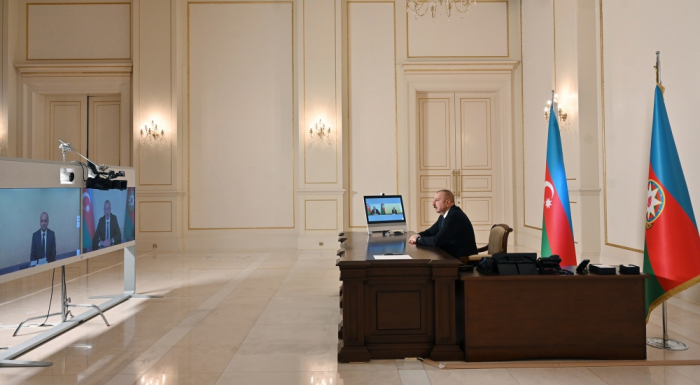 Azerbaijan’s President Ilham Aliyev on Thursday called on citizens not to travel to the country’s liberated lands without permission and illegally, AzVision.az reports.

“Unfortunately, accidents have been taking place in the liberated lands in the past few days and in the immediate aftermath of the war. I want to appeal to the citizens of Azerbaijan and ask them not to travel to the liberated lands without permission and illegally,” the head of state said as he received in a video format Vugar Suleymanov due to his appointment as Chairman of the Board of the Agency for Mine Action of the Republic of Azerbaijan.

“On the one hand, I can understand these steps of the people, they have longed for the homeland for many years and every former IDP wants to return to his homeland, to the native village, but I ask them to wait a little. Let them wait for the demining work to be completed. Because this is a great danger, a great danger to both pedestrians and cars. Since the war ended, several such accidents have occurred, killing and injuring people. At the same time, the officers stationed at the checkpoints must organize more strict control to stop illegal and unauthorized travel to the liberated lands,” President Aliyev added.

The president stressed that after the occupation the contemptible enemy planted booby traps everywhere.

“The enemy has mined not only areas close to the line of contact, but also cities, roads, important strategic heights, and we do not have maps of these minefields. Therefore, our sappers have a huge task. They must carry out this task in such a way that no mines are left in the liberated lands,” he concluded.