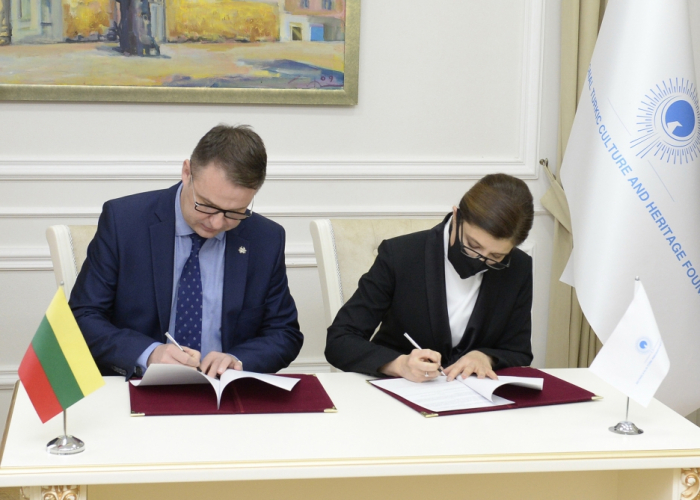 A Memorandum of Cooperation has been signed between the International Turkic Culture and Heritage Foundation and the Embassy of the Republic of Lithuania in Azerbaijan. The document was signed by the President of the Foundation Gunay Afandiyeva and the Ambassador of Lithuania to Azerbaijan and Turkmenistan Egidius Navikas, AzVision.az reports citing AzerTag.

The signing of Memorandum aims at implementing mutual cultural exchange, protecting the cultural heritage of the minority peoples of Lithuania of Turkic origin - Tatars and Karaites, expanding and strengthening cooperation.

The event was attended by Deputy Minister of Foreign Affairs of the Republic of Azerbaijan Ramiz Hasanov, ambassadors of the member and observer countries of the Foundation, representatives of international organizations and intelligentsia.

Speaking at the event, President of the International Turkic Culture and Heritage Foundation Gunay Afandiyeva said that the building of the organization was allocated for permanent use by a special order of the President of the Republic of Azerbaijan Ilham Aliyev. Gunay Afandiyeva said that the official opening of the building took place on October 14, 2019 on the sidelines of the 7th Baku Summit of the Turkic Council with the participation of foreign ministers of member and observer countries of the Foundation and heads of Turkic Cooperation organizations.

Gunay Afandiyeva stressed the importance of the Memorandum signed between the Foundation and the Embassy of Lithuania in Azerbaijan. "This is about preserving the cultural heritage of the Turkic-speaking peoples - Karaites and Tatars living in Lithuania, promoting their history and traditions. I think this Memorandum is also important for Lithuania. Because Lithuania thereby demonstrates its special attention towards the peoples living on its territory. Our cooperation with the Lithuanian Embassy began in 2019, when the Summit was held in Baku. Within the framework of the Summit, the Foundation held the " Week of the Turkic World”, where along with various exhibitions and conferences, an event dedicated to the women of the Turkic world was organized. The conference was attended by women representatives of various Turkic-speaking countries. In that time the newly appointed Ambassador to Azerbaijan, Mr. Egidius Navikas assisted in inviting the representative of the Karaites from Lithuania, the famous actress Severina Shpakovskaya. I think this collaboration was the beginning. This year has been declared the Year of Karaites and Tatars in Lithuania. I believe that various joint events and projects await us, since we are talking about the great Turkic world, its rich culture, ancient history and great spirituality.”

Ambassador of the Republic of Lithuania to the Republic of Azerbaijan and Turkmenistan Egidius Navikas hailed the cooperation with the International Turkic Culture and Heritage Foundation. “Lithuania's interest in signing the Memorandum lies in the fact that we had very strong and deep ties with the Turkic world before. Small but peculiar representatives of minorities live in Lithuania - Tatars and Karaites. These Turkic people came to Lithuania in the 14-15th centuries at the invitation of the Germans from the Crimea as soldiers.”

Referring to historical facts, the Ambassador stressed that after the end of the First World War in 1918 and the collapse of the Russian Empire, many Tatars took part in the formation of a new government in Crimea. “In the same year, the Lithuanian Tatars also took an active part in the creation of the Azerbaijan Democratic Republic and the establishment of various structures. Despite their small number during all this time, the Tatars and Karaites managed to preserve their identity.

With the signing of this Memorandum, we are taking a new step in carrying out further events, as well as in continuing cooperation."

A signing ceremony of the Memorandum of Cooperation between the President of the International Turkic Culture and Heritage Foundation Gunay Afandiyeva and the Ambassador of Lithuania to Azerbaijan and Turkmenistan Egidius Navikas then was held.

A concert program was organized as part of the event. The concert was attended by the “Karabakh” mugham group headed by People's Artist of Azerbaijan Mansum Ibrahimov, as well as the winner of the "Mugham" TV contest Gulzar Farajova, the winner of the international mugham contest Orkhan Huseynli and the young performer Amina Nurmakhambetova.