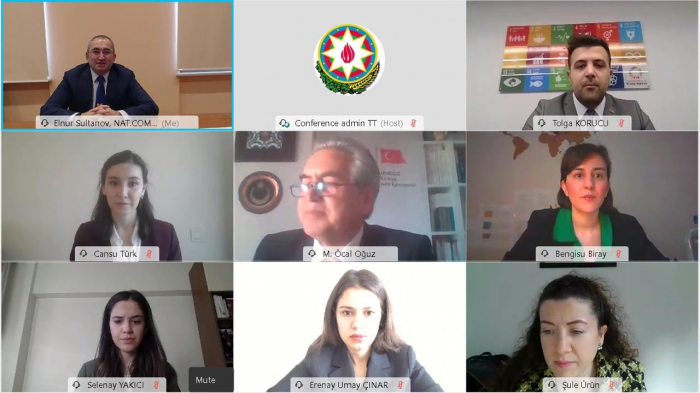 National Commissions of Azerbaijan and Turkey for UNESCO held online consultations to discuss areas of joint cooperation, the press service of the Azerbaijani Foreign Ministry told reporters on Feb.6.

The meeting participants emphasized that fraternal relations are successfully developing between the two countries and they also established close cooperation within the framework of UNESCO. In this regard, the importance of holding such a meeting was stressed to discuss the current status and prospects of the joint cooperation in the areas under the organization’s mandate, and to prepare a common action plan.

During the meeting it was also noted that as a result of Armenia's military aggression against Azerbaijan, the historical, cultural and religious heritage was destroyed, numerous war crimes were committed, and gross violations of UNESCO conventions were made.

It was pointed out that information on the results of monitoring carried out by the Azerbaijani Ministry of Culture in the liberated (from Armenian occupation as a result of 44-day war from late Sept. through early Nov.2020) territories is regularly provided to the UN’s organization and consistent work is carried out.

Given the common history and culture of Azerbaijan and Turkey, the participants stressed importance of continuing the tradition of submitting joint nominations within the framework of UNESCO, as well as joint efforts to popularize the rich heritage of the two countries in the world.

The parties also thoroughly discussed directions related to the mandate of UNESCO. Achievements and prospects of cooperation between the two countries within such educational programs of the organization as the Global Network of Learning Cities, the Cathedral Program and Associated Schools Network were touched upon.

Besides, a productive exchange of views between the participants took place on the areas of partnership within the Anniversaries Program, the Creative Cities Network, Clubs of UNESCO, tangible and intangible cultural heritage, natural heritage, and the Memory of the World Program.

During the meeting on the agenda, specific proposals were voiced, and an agreement was reached to hold similar meetings in the future.