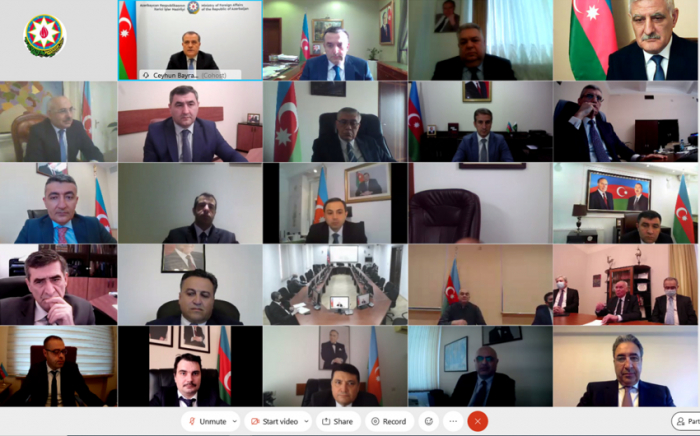 On February 12, 2021, the leadership of Azerbaijani Ministry of Foreign Affairs of met with the diplomatic missions of the Republic of Azerbaijan operating in foreign countries and with international organizations in an online format. The meeting was also attended by deputy foreign ministers, ambassadors for special assignments and heads of structural departments of the ministry, AzVision.az reports with reference to the Azerbaijani Foreign Ministry.

Opening the meeting, Foreign Minister Jeyhun Bayramov spoke about the multi-vector foreign policy activities proceeding from the national interests of Azerbaijan, about policy's priorities and new challenges, about the development of relations in bilateral and multilateral areas. The conference participants were informed in detail about the active foreign policy pursued by Azerbaijan in 2020, about the development of cooperation with other countries, initiatives taken on a global scale, participation in international organizations and other issues.

Particular attention was paid to the new realities and the geopolitical situation created in the region as result of the Second Karabakh war last year. It was emphasized that the implementation of the trilateral statements dated November 10, 2020 and January 11, 2021 ensures peace, security and progress in the region, and the importance of the activities of Azerbaijani diplomatic missions in the field of consistent and effective delivery of the truth about Azerbaijan and the situation in the region to the world community was noted.

During the videoconference, the heads of Azerbaijani diplomatic missions exchanged views on the main events that are expected to take place during the year, a number of administrative and organizational issues, as well as personnel issues. The proposals of the diplomatic missions on the effective implementation of the foreign policy course in the new realities were heard.

Participants noted the importance of online meetings in terms of information provision and coordination, agreeing to continue such consultations in the future.