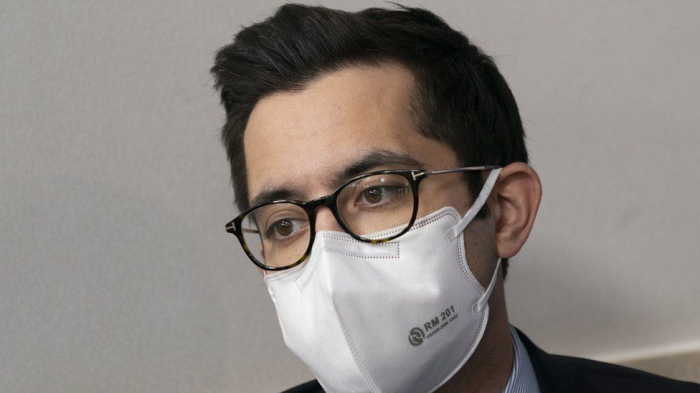 Mr Ducklo had reportedly said he would "destroy" Politico journalist Tara Palmeri who was asking questions about his private life.

In a statement on Saturday, Mr Ducklo said his language had been "abhorrent".

President Joe Biden has vowed to fire anyone in his administration who treats "another colleague with disrespect".

In the statement posted on Twitter, Mr Ducklo, 32, wrote: "No words can express my regret, my embarrassment and my disgust for my behaviour."

"I used language that no woman should ever have to hear from anyone, especially in a situation where she was just trying to do her job. It was language that was abhorrent, disrespectful and unacceptable.

"I am devastated to have embarrassed and disappointed my White House colleagues and President Biden, and after a discussion with White House communications leadership tonight, I resigned my position."

Mr Ducklo said "this incident is not representative of me I am as a person", adding that he was determined "to earn back the trust of everyone I have let down because of my intolerable actions".

Ms Palmeri has so far made no public comments on the latest developments.

How did the row develop?

Mr Ducklo was suspended on Friday, after Vanity Fair magazine reported on his alleged threats to Ms Palmeri.

The Politico reporter had been investigating Mr Ducklo's relationship with Alexi McCammond, a journalist with Axios who had covered Mr Biden's election campaign.

He allegedly rang her and said: "I will destroy you". He also made other derogatory and misogynistic comments, Vanity Fair reports.

President Biden's spokeswoman, Jen Psaki, tweeted on Friday that TJ Ducklo was "the first to acknowledge this is not the standard of behaviour set out by the president".

On Saturday, Ms Psaki said Mr Ducklo's decision to quit had come with the support of White House chief of staff Ron Klain, according to the Associated Press news agency.

She added that "we are committed to striving every day to meet the standard set by the President in treating others with dignity and respect, with civility and with a value for others through our words and our actions".

President Biden told his staff on his first day in office last month that he would not tolerate bullying behaviour.

"I'm not joking when I say this: If you ever work with me and I hear you treat another colleague with disrespect, talk down to someone, I will fire you on the spot. No ifs, ands or buts," he said.