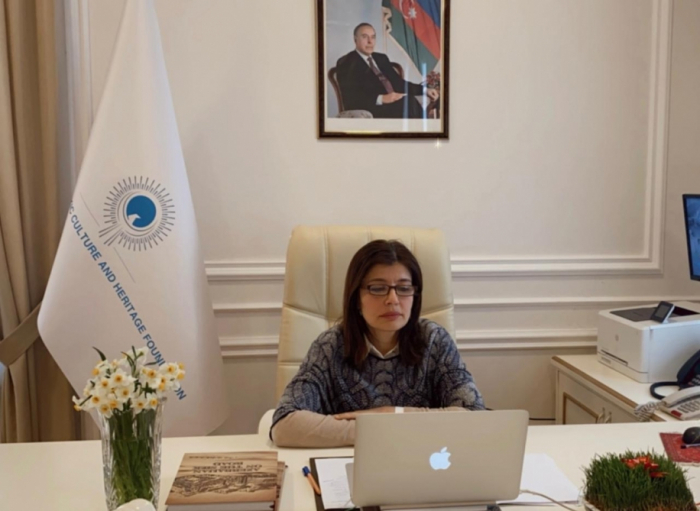 On February 24, President of the International Turkic Culture and Heritage Foundation Gunay Afandiyeva participated in an online seminar on the topic “Turkic Republics on the 30th anniversary of their Independence: Yesterday, Today and Tomorrow.” The event was organized within the framework of cooperation of the Center for Strategic Research of the Ministry of Foreign Affairs of Turkey and the International Turkic Academy.

A member of the Security and Foreign Policy Council of the Turkish Presidential Administration of the Republic of Turkey, Professor Aygun Attar participated in the seminar as a moderator.

President of the International Turkic Culture and Heritage Foundation Gunay Afandiyeva made a speech at the event.

In her speech, the President of the Foundation noted that the proclamation of the independence of the Turkic states left an indelible mark on the glorious page of their history. Gunay Afandiyeva pointed out the importance of developing cultural integration of the Turkic peoples for joint actions in all fields. At the same time, she emphasized that brotherly Turkey is the first state to recognize the independence of the Turkic states, and especially paid attention to the attitude that Turkey has always shown to the Turkic-speaking peoples.

Turning to the issue of Karabakh liberation from occupation, Gunay Afandiyeva noted that as a result of farsighted policy of President of the Republic of Azerbaijan Ilham Aliyev reunion of ancestral lands of Azerbaijan are inscribed in golden letters in the history of the Turkic world. Gunay Afandiyeva stressed the importance of the solidarity shown by the Turkic Cooperation Organizations in that period and the need to work together to restore the destroyed territories.

Gunay Afandiyeva spoke about the activities of the International Turkic Culture and Heritage Foundation, organized events, as well as projects that would be implemented to preserve and popularize the material and cultural heritage of the Turkic-speaking peoples. She drew attention to the expansion of cooperation of the Foundation not only with member countries, but also with other states, including European countries. The President of the organization noted that at the beginning of this year, a Memorandum of Cooperation was signed between the Foundation and Lithuania, aimed at preserving the historical and cultural heritage of the peoples of Turkic ethnic origin living there - Tatars and Karaites.

The seminar continued with an exchange of views on joint projects to develop the culture and history of the Turkic world.