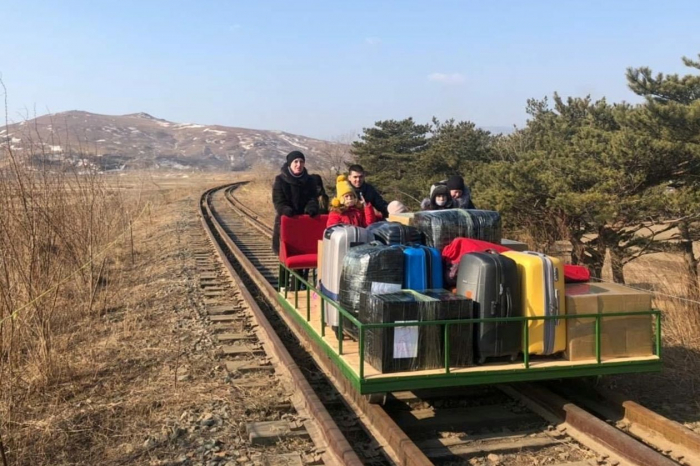 Stuck in the hermit kingdom since North Korea sealed its borders due to the coronavirus, Russian diplomats found an imaginative way to get home.

Russian diplomats stuck in North Korea for more than a year due to the coronavirus pandemic embarked this week on a remarkable odyssey to get home, traveling by bus, train—and hand-powered rail cart.

A group of eight people from Russia’s embassy in Pyongyang along with their family members set off earlier this week on a “long and difficult journey” to return to Russia, said the Russian foreign ministry on Friday.

For just over a year, the diplomats had been unable to leave North Korea after Pyongyang sealed its borders due to the coronavirus. Deciding to leave on their own, the group traveled 32 hours by train and an additional two hours by bus to reach the North Korean-Russian border.

Then came “the most challenging part”—crossing into Russia, the foreign ministry wrote on Facebook . To do this, the group mounted a specially made wooden cart onto rail tracks, loaded it with their belongings—including their children—and “off they went,” pushing the railcar by hand for close to a mile until it entered Russian territory, the ministry said.

The group of Russians included the embassy’s third secretary, Vladislav Sorokin, and his 3-year-old daughter Varya, who was the group’s youngest traveler, the ministry said.